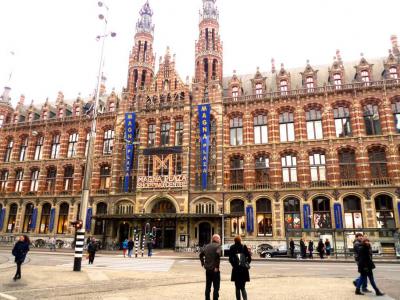 Magna Plaza is an elegant 19th century building, currently housing one of the few shopping malls in Amsterdam, located directly behind the Queen's Palace on Dam square. Built in 1895–1899, the building features a mix of Neo-Gothic and Neo-Renaissance styles, and has been a rijksmonument – a listed national heritage site (one of the Top 100) of the Netherlands – since July 9, 1974. The brick exterior is heavily and variedly decorated with dimension stone, including window and door framings. Across the roof edges there are a large number of dormers, each with their own crow-stepped gable. Due to the pear-shaped crowns on top of the towers, the building is colloquially referred to as “Perenburg” (English: pearburg).
Image by Franklin Heijnen on Flickr under Creative Commons License.