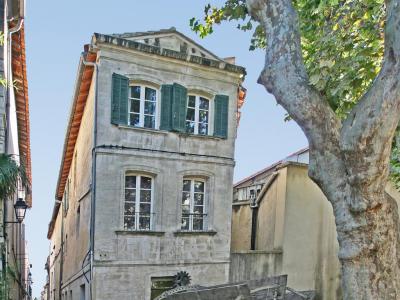 Jean-Henri Fabre, born December 21, 1823, was a scientist, naturalist, an eminent entomologist, a writer fascinated by nature and winner of a large number of prizes. He can be seen as the father of ethology, the science of animal behavior, and ecophysiology. His findings are highly regarded in Russia, the United States and especially in Japan where he is considered the model of the scientist and man of letters. Jean-Henri Fabre is also known worldwide for his entomological memorabilia, which have been translated into fifteen languages. Born in St. Léons Lévézou (Aveyron), in 1853 he moved to Avignon. His best known residence was at 14 Rue des Teinturiers. An old building with a large wheel in front of it, it is a recognizable landmark on Dyers Street.
Image by Jean-Marc Rosier on Wikimedia under Creative Commons License.