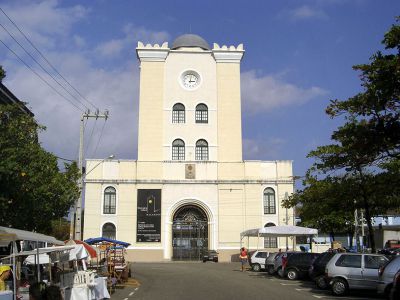 The tower was renovated in 1999, keeping the old features of the Tunisian-style monument. Today, it is a cultural area and astronomical observatory. Cultural area – has the proposal involving science, art and technology. Works with exhibitions of photos, comics, among others and it is used to do popular manifestations as well. Astronomical observatory - it is one of the two astronomical observatories belonging to the space science museum. One here, at the Malakoff Tower, and the other one located in Olinda.
Image by Ricardo André Frantz on Wikimedia under Creative Commons License.
Sight description based on wikipedia

Want to visit this sight? Check out these Self-Guided Walking Tours in Recife. Alternatively, you can download the mobile app "GPSmyCity: Walks in 1K+ Cities" from iTunes App Store or Google Play. The app turns your mobile device to a personal tour guide and it works offline, so no data plan is needed when traveling abroad.