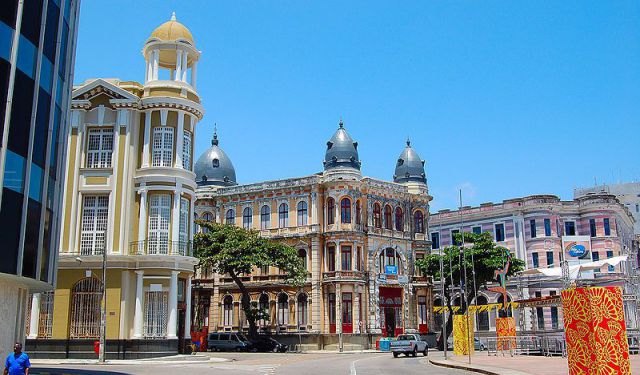 In addition to the many rivers, bridges and peninsulas making up most of what's unique about Recife, the main city of the Brazilian state Pernambuco is also famous for its historic downtown area originated in the 16th century. Follow this orientation walk and learn about the past and present of this exiting destination!
Image Courtesy of Wikimedia and Delma Paz.
How it works: Download the app "GPSmyCity: Walks in 1K+ Cities" from iTunes App Store or Google Play to your mobile phone or tablet. The app turns your mobile device into a personal tour guide and its built-in GPS navigation functions guide you from one tour stop to next. The app works offline, so no data plan is needed when traveling abroad.

Praça Artur Oscar (formerly Praça Arsenal) is a popular place for dates and fun outings during evenings in Recife. The square has the bust of Admiral Tamandaré, who is a famous hero of the Brazilian Navy, a fountain and many social and entertainment events during the year, including the Carnival. Also, around here are located a large number of restaurants, cafes and nightclubs.
Image Courtesy of Flickr and David Paul Ohmer.
4

The tower was renovated in 1999, keeping the old features of the Tunisian-style monument. Today, it is a cultural area and astronomical observatory. Cultural area – has the proposal involving science, art and technology. Works with exhibitions of photos, comics, among others and it is used to do popular manifestations as well. Astronomical observatory - it is one of the two astronomical observatories belonging to the space science museum. One here, at the Malakoff Tower, and the other one located in Olinda.
Image Courtesy of Wikimedia and Ricardo André Frantz.
Sight description based on Wikipedia.
5

Teatro Apolo is the oldest theatre in Recife. It was built in 1842, in a neoclassical style by the architect Rio de Barros Lopes Joaquim Cabral and Teive. After eighteen years of work the theatre was transformed into a sugar warehouse and only its marble facade was preserved. Later the theatre was restored back to being a theatre and since 1996 has housed a live theater with performances all year long.
Image Courtesy of Flickr and brokentrinkets.
6

Igreja de Nossa Senhora do Livramento is a an aesthetically-intriguing church. Its contraction started in the 18th century on the site of an older chapel, but it was finished in 1882. It has a great tower of twenty-five meters, beautiful carved doors and a granite facade. The interior has intricate carvings. The ceiling was done in wood. Within the church you will see images of Our Lady of Conception and of Saint Mary Garcia.
Image Courtesy of Flickr and Kevin Dooley.
8

Mercado do Sao Jose is a local public market and landmark in Recife. The structure was built in 1875 and it is representative of the architecture of European markets at the time. The building was built by J. Lieuthier Louis in a neoclassical style. It is the oldest building in Brazil made in pre-manufactured iron. The market is very large and it has two buildings and 542 boutiques within.
Image Courtesy of Wikimedia and FilRB.
9

Catedral De Sao Pedro Dos Clerigos is a popular tourist attraction in Recife. It was built by Manuel Ferreira Jácome in 1759 using the Great Santa Maria Sanctuary in Rome as a model. The church is beautiful, with two bell towers and an amazing interior made with a neoclassical design. The ceiling is painted, the interior features carvings, while the pulpit is engraved in gold. The church itself was built in baroque style.

Why You Should Visit:
Reinaugurated in 2017, after years of restoration works, this is arguably one of the most beautiful cathedrals in Brazil, inside and out.
Sometimes they play parties on the patio in front of the Cathedral on weekends.
Image Courtesy of Wikimedia and FilRB.
10

Igreja Nossa Senhora do Rosario dos Homens Pretos is an important historic and religious site. The church was built in colonial style in the 17th century, sometime between 1662 and 1667, by the Brotherhood of Our Lady of the Rosary of Black Men, which was a brotherhood of black slaves. The church is Baroque, with just a single tower, but nevertheless the church is a very beautiful one, with three altars, images of Our Lady of the Rosary and other black saints. The main altar is engraved in gold. It is a great example of the architecture of 17th century Recife. The church is located 90 m to the eaast from the intersection of Avenida Dantas Barreto and Rua Estreita do Rosário.
Image Courtesy of Flickr and Fernando L G Guimarães.
11

The Franciscan Museum of Sacred Art simply displays amazing religious art objects. Among them are precious images, pictures, candleholders, candles, furniture, an altar, a crucifix dating to 1751 and many other fascinating objects. The museum is established within the adjacent Convent of St. Anthony, in the famous Golden Chapel of Recife (Capela Dourada), a magnificent colonial baroque church built in 1697.

Why You Should Visit:
Formidable edifice. Lots of gold. Guide on the spot.

Palácio da Justiça is another famous tourist attraction and historic sight in Recife. The structure was built in 1930 in Renaissance style with fascinating stained glass windows. The building has several levels and a beautiful dome which is the highest dome in the country. In front of the building there are two striking sculptures representing law and justice. Within the building there are busts of local lawyers and paintings by Murillo La Greca. Palácio da Justiça houses the Court of Justice of Pernambuco.
Image Courtesy of Wikimedia and Delma Paz.
13

A very beautiful Neoclassical structure built in 1850 by Louis Léger Vauthier, Teatro de Santa Isabel is a place for the most prestigious social and cultural events of Recife and the home of the Recife Symphony Orchestra. The interior of the theater is extraordinarily rich. It has amazing crystal mirrors, works of Murillo La Greca, an outstanding crystal chandelier and busts of famous personalities within. Numerous celebrities have visited the famous theater.

Why You Should Visit:
There is history and charm in every corner of this building!

Tip:
Guided tours on Sundays, but do check their website for schedules of visits and of performances.

The Palacio do Campo das Princesas is a neoclassical structure built in 1841 by Mitchell Anchor on the site of the former Royal Treasury. The Palace was always the headquarters of the Pernambuco administration. The name of the palace came from the family of the Emperor Dom Pedro II and his children that played in the garden. The site is famous for its beautiful garden with baobab trees. The Palacio do Campo das Princesas is one of the most popular tourist stops in Recife.
Image Courtesy of Wikimedia and Raul.