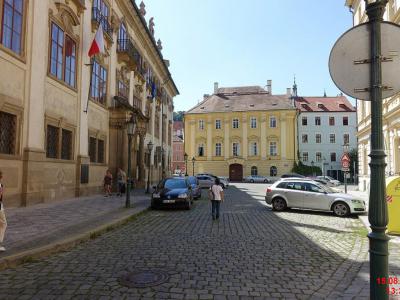 While you are exploring Prague’s Lesser Town take a little time to visit Maltese Square. At first sight it might not seem very much, but it is nevertheless steeped in history and legend and also has a number of charming cafés and pubs.

The square was named after the Knights of the Maltese Cross who built a monastery there in 1169, next to the church of Our Lady below the Chain. This church is the oldest in the Lesser Town and is named after the chain that was used to secure the church gates at night. A Gothic presbytery was added in the 13th century and the church was given a Baroque façade in 1640. Today, the two towers of the church have been transformed into very expensive apartments.

In the square you will also find Nostitz Palace, an early Baroque building with a Rococo portal. Once the home of the Nostitz family who supported young artists and musicians, it is now the seat of the Ministry of Culture. There is also a library containing over 15 000 books.

Opposite the Nostitz Palace stands the Strakas of Nedabylice Palace, built in 1690 and where the famous Dutch sculptor Adriaen de Vries had a workshop.

To the North of the square you can admire a statue of St John the Baptist. This statue was erected to give thanks to the end of a plague that ravaged the town in 1715. According to legend, if the statue is removed from the square, the plague will come back.
Image by Bogdan Migulski on Flickr under Creative Commons License.