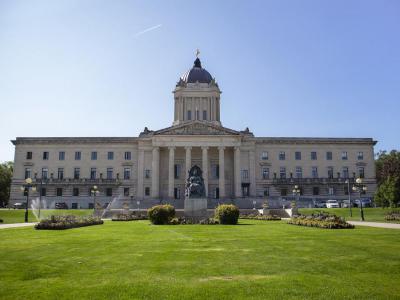 The Manitoba Legislative Building is the meeting place of the Legislative Assembly of Manitoba. It was originally named the Manitoba Parliament Building.

The neoclassical building was completed in 1920 and stands seventy-seven meters tall (253 ft). It was designed and built by Frank Worthington Simon (1862-1933) and Henry Boddington III, along with other masons and many skilled craftsmen. The building is famous for the Golden Boy, a gold covered bronze statue based on the style of the Roman god Mercury, or the Greek god Hermes, at the top of the cupola, or domed ceiling.

July and August: Monday – Sunday: 9 am – 4 pm
Image by Canucks4ever83 on Wikimedia under Creative Commons License.
Sight description based on wikipedia

Want to visit this sight? Check out these Self-Guided Walking Tours in Winnipeg. Alternatively, you can download the mobile app "GPSmyCity: Walks in 1K+ Cities" from iTunes App Store or Google Play. The app turns your mobile device to a personal tour guide and it works offline, so no data plan is needed when traveling abroad.

Saint Boniface is the historic French quarter where there are many famous Winnipeg’s religious, social and historical landmarks, as well as the largest French community. Its unique architecture, cozy cafes and numerous shops will make it an unforgettable experience. Take the following walking tour to discover the most prominent landmarks of Saint Boniface in Winnipeg.