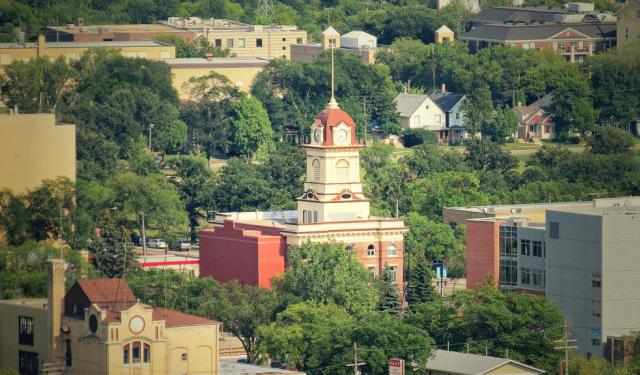 Image by 1ajs on Wikimedia under Creative Commons License.

Saint Boniface is the historic French quarter where there are many famous Winnipeg’s religious, social and historical landmarks, as well as the largest French community. Its unique architecture, cozy cafes and numerous shops will make it an unforgettable experience. Take the following walking tour to discover the most prominent landmarks of Saint Boniface in Winnipeg.
How it works: Download the app "GPSmyCity: Walks in 1K+ Cities" from iTunes App Store or Google Play to your mobile phone or tablet. The app turns your mobile device into a personal tour guide and its built-in GPS navigation functions guide you from one tour stop to next. The app works offline, so no data plan is needed when traveling abroad.

St. Boniface Museum quarters in the oldest building in Winnipeg, which was built in 1846 for Grey Nuns that arrived in the Red River Colony. The museum exhibits personal items of well-known Canadian people and is totally dedicated to the culture and history of Manitoba, exhibiting items such as the violin of Andy De Jarlis and the coffin of Louis Riel. St. Boniface Museum is visited by thousands of tourists each year but is also very popular among the local population of Winnipeg. The museum is open 7 days a week, Monday till Wednesday,Friday from 10 am till 4 pm, Thursday from 9 am till 9 pm and on Saturday from 12 pm till 4 pm.
Image by Oscar Reimer on Flickr under Creative Commons License.
2

It is an important building in Winnipeg, and is the principal church in the Roman Catholic Archdiocese of Saint Boniface, serving the eastern part of Manitoba province as well as the local Franco-Manitoban community.

The first church on the site was founded by Fr. Norbert Provencher, a priest and future bishop, who ordered its construction in 1818 in the form of a small log chapel. In 1832 Bishop Provencher built the first cathedral but on December 14, 1860, a fire destroyed the first building. In 1862, Bishop Alexandre Taché rebuilt the cathedral in stone.

By 1900, St. Boniface was the fifth largest city in the West and needed a larger cathedral. On August 15, 1906, Monsignor Louis-Philippe Adelard Langevin dedicated the cathedral, which became one of the most imposing churches in Western Canada.

In 1972, a new cathedral, designed by Étienne Gaboury and Denis Lussier, was built behind the 1906 façade.


Image by Dondon83 on Wikimedia under Creative Commons License.
Sight description based on wikipedia
3

The Esplanade Riel is a pedestrian bridge, designed by Colin Douglas Stewart of Wardrop Engineering and the architect Étienne Gaboury, and completed in 2003. It spans the Red River connecting downtown Winnipeg with St. Boniface. It is paired with a vehicular bridge, Provencher Bridge. The bridge is one of a few in the world that has a restaurant (Salisbury House) on it, giving patrons an excellent view of the river and the bridge's structure.

The Esplanade Riel has become a landmark and is used in many promotional materials. The bridge itself is a side-spar cable-stayed bridge. The original drawing, stamped by Colin Douglas Stewart, rests in the Engineering building of the University of Manitoba in Winnipeg.
Image by Loozrboy on Flickr under Creative Commons License.
Sight description based on wikipedia
4

St. Boniface City Hall is located on Provencher Boulevard just behind St. Boniface Fire Hall № 1. It was built by Provincial architect Victor Horwood in 1906, but because of a money shortage, the initial design was changed and there were many people unsatisfied by it, so after 1907 its tower was redesigned. It served as City Hall until 1950 when the 3rd floor was rented out as office space. Today it is still a working building and is used for the St. Boniface Community.
Image by Jim Jaworski on Wikimedia under Creative Commons License.
5

St. Boniface Fire Hall was built in the period of economic and population growth at the beginning of the 1900s when most of the architectural jewels of Winnipeg were built. Architect Victor Horwood designed Fire Hall in 1904, and in 1907 it was completed. The Fire station was active until 1969. Today this historical building is a great example of Romanesque architectural style that is definitely worth visiting.
Image by Ted Sali on Flickr under Creative Commons License.
6

Lagimodiere Gaboury Historic Park is a popular recreation place for locals and tourists and it is located on both the Siene River and Red River. The Park is famous for its Lagimodiere Gaboury historic Gate which commemorates the world renowned voyagers Marie-Anne Gaboury and Jean-Baptiste Lagimodière.
Image by theclyde on Flickr under Creative Commons License.
7

Fort Gibraltar is located in the St. Boniface district of Winnipeg, just on the shore of the Red River. It was originally built in 1809 by the North West Company and was successfully active until 1816 when it was demolished by its rival, Selkirk Colony, though its history doesn’t end here. In 1821 it was rebuilt and continued to serve until the flood destroyed it in 1852. Given its importance in the fur trading history of North America, it was decided to rebuild Fort Gibraltar in 1978 for the Festival du Voyageur that take places every winter. Today the Fort Gibraltar museum exhibits the history of the Red River valley and its settlers as from 1815.
Image by theclyde on Flickr under Creative Commons License.