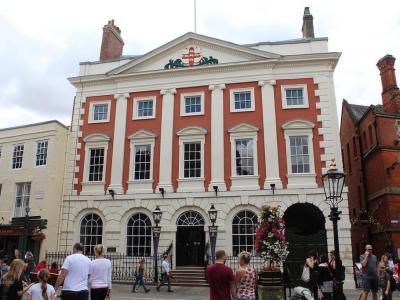 The Georgian-style Mansion House in York is the home of the city's Lord Mayors during their term in office. This is the earliest purpose-built house of this sort still in use – it predates the Mansion House in London by at least 20 years.

The foundation stone for the building was laid in 1725, and it was completed seven years later, in 1732. The architect is unknown, although the frontage is tentatively attributed to William Etty.

The house was built on the site of the old "Common Hall Gates" which provided entrance to the 15th-century York Guildhall situated behind – there the medieval city council previously met. Nowadays, each year, in May, the Mayor Making ceremony is also held in the Guildhall prior to the Lord Mayor taking up residence in the Mansion House.

Among other things, the place holds one of the largest civic silver collections in England. The exhibits include a 17th-century silver chamber pot and gold cup which were bought for the City of York with the monies bequeathed by Marmaduke Rawdon in 1669. The collection of civic regalia also features a 17th-century mace and two city swords: the Bowes Sword – donated to the city by Sir Martin Bowes, Lord Mayor of London, in 1545; and the Sigismund sword (aka York's Great Sword of the State) – once owned by the Holy Roman Emperor Sigismund, dating 1416.

Additionally, the Mansion House holds a collection of antique furniture and oil paintings of previous Lord Mayors of York, such as George IV as Prince Regent, Charles Watson-Wentworth, Marquis of Rockingham and George Hudson.

The building's most recent restoration took place in 1998 courtesy of the York Civic Trust.
Image Courtesy of Wikimedia and Chabe01.
Sight description based on Wikipedia.