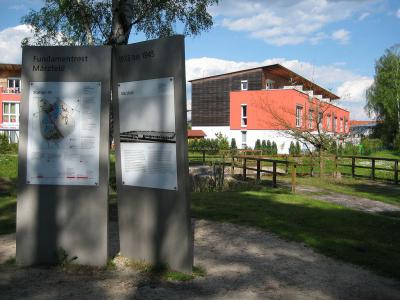 The Märzfeld, or March Field, was to be a representation and parade ground for the Wehrmacht. It was located at the southern end of the "Große Straße" (Great road). Its dimensions were 955 x 610 meters (1,061 x 677 yards) (bigger than 80 football fields). The name of the huge deployment area intended to remember the recovery of the military sovereignty of the German Reich in March 1935. ("März" is the German name for the month "March" and has nothing to do with the verb "to march", the German name of the month "März" derives from the Roman Warrior God Mars.)

The construction, never completed, began in 1938 with plans calling for 24 granite towers each at 125 feet in height. Only eleven were ever completed and demolished in 1966. Tribunes for about 160,000 people were planned around the field. On the central grandstand a group of colossal statures was planned: a goddess of victory and warriors. Today the site is occupied by an apartment complex.
Image by Manfred E. Fritsche on Wikimedia under Creative Commons License.
Sight description based on wikipedia