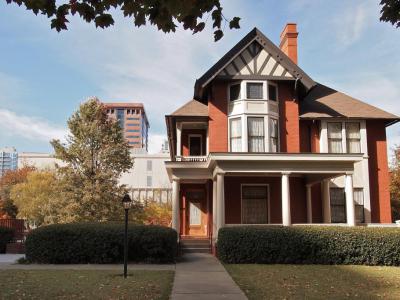 One could honestly stay in the Margaret Mitchell House for hours given the amount of experience, information, and context provided. From seeing what Atlanta was like back in the 1920s to insights into Margaret Mitchell's entire life; the hype around the casting and making of the "Gone With the Wind" movie – you will find it all here!

The "house" part itself is really just the first-floor apartment where Margaret and her husband lived (they did not actually occupy the whole space), which was recreated with 1930s decor. Although the artifacts were not owned by Margaret, the look and feel bring observers into the aesthetic of where she penned her famous novel. Midtown Atlanta might not have been the best area back then, hence she referred to the apartment as "The Dump", but you'll likely find it to be pleasant.

If you have time, be sure to head into the separate building across the backyard (covered in the price of admission) to watch part of the documentary on how the GWTW film was made, including the original casting footage with various Hollywood stars at the time. Another interesting section, packed with pictures, news reels, and newspaper articles, documents what it was like during the movie's 1939 premiere in Atlanta.

All in all, if you at all enjoy the "Gone With the Wind" book or film, then you should check this nice little gem out!

Tip:
Admission to the Atlanta History Center also includes tickets to the Margaret Mitchell House which you can use at any point during in the next 9 days. The visit to the house itself is greatly enhanced by a tour with a docent, which does not cost extra but is not always offered, so call ahead to make sure you can get on it. There are several exhibits inside house as well as a two-hour film on the making of "Gone with the Wind" in an attached building, so give yourself enough time.