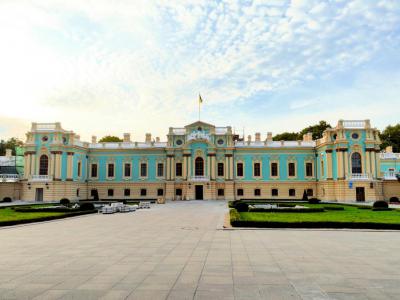 The Mariinsky Palace in Kiev was built between 1750 and 1755 to a design by one of the most popular Italian architects working in Russia at the time, Bartolomeo Rastrelli. Meant as a private residence for Empress Elizabeth, the palace was sited on a hilly bank of the Dnieper river, near the present Verkhovna Rada (Ukraine's Parliament). The Baroque style complex has a symmetrical composition, with a two story main building facing Mariinsky Park and two single story buildings on each of the sides. Combined, the buildings form a court which encloses a beautiful park. On the inside the buildings are decorated in a Baroque style with a touch of Renaissance.

The palace was used as a royal residence for the first and only time in 1787, during the visit by Empress Catherine II to Kiev. In the years afterwards it accommodated mostly the city's governor-generals. In the 1870s, the Mariinsky suffered severe damage from a violent fire, that ravaged nearly all of it, and demanded serious restoration. Major restoration works also took place in the late 1940s following World War Two, and the early 1980s. All the works were performed in a strict accordance with the building’s original layout and fully retained the original colours, style and decorations.

Today, the palace is used as the residence of the Ukrainian president and hosts official meetings and receptions regularly attended by foreign leaders.
Image Courtesy of Flickr and Francisco Anzola.