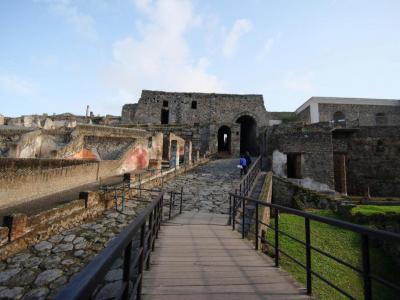 Porta Marina is one of the two main gates which allowed access through the city walls and into the centre of Pompei. Located in a fortified section of the stone walls, Porta Marina faces towards the sea – hence the name, Marine Gate. It is comprises of two arches – a smaller arch for people to pass through, and a larger arch for animals such as mules and donkeys.

Just outside the Porta Marina, you will find one of the city’s newly discovered treasures. Known as the Suburban Baths, this former public bath house was only discovered in 1958, several years after the Central Baths were unearthed in the city centre. The baths possess a couple of unusual features which have given a fresh insight into the social and cultural life of Pompei.