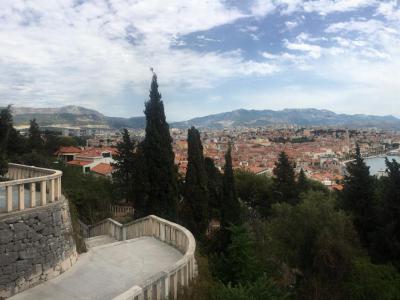 Marjan Hill fits the definition, "And now, for something completely different..." it holds a special place in the life of the City. For years city dwellers would see the old Yugoslav flag flying from the top of the hill. Now, Croatia, proudly independent, flies its own flag on top of Marjan Hill. In 1964 Marjan became a park and part of the city.

The park extends from Marmont Street west for nearly two miles. During summer months, amid the chaotic pace of the town it is a popular escape. The hills and woods of the park are the very lungs of the city. It is the preferred place for walking, jogging, climbing, or bike riding.

The highest peak in the park is Telegrin, so named for the telegraph which stood there in Napoleonic times. The park is also the location of the Ivan Mestrovic Gallery, an art gallery open to the public. Meje Split neighborhood, the city's elite seaside beach district is here, surrounded by the sea on three sides.

There are many possible entrances to Marjan Park. The favored one begins at Terrace Vidilica, a bar and restaurant with a great view. This is but a five minute walk from the promenade. If walking be prepared for an early climb.
Image Courtesy of Flickr and David Jones.