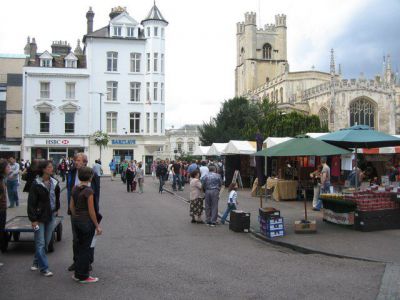 Market Hill (aka Market Square) is a 203-metre long street in central Cambridge that is known primarily as the location of the daily outdoor market that has been operational since Saxon times. Here you will find stalls selling a wide range of goods including clothes, books, fresh and healthy fruits and vegetables, second hand bikes, mobile phone accessories and much more.

The place is steeped in history. Back in 1381, during the Peasants' Revolt, a mob led by the Mayor of Cambridge destroyed the university's ledgers in Market Square on 16 June. One Margery Starre led the crowd in a dance to the rallying cry "Away with the learning of clerks, away with it!".

The current Market Square was mainly filled with buildings originally and was not cleared until 1849 when a major fire occurred. Following the fire, the square was redeveloped and in 1855 a Gothic Revival gabled fountain was added. Most of the fountain was demolished in 1953. a water flow to it was cut off in 1960, during the construction of the Lion Yard shopping centre, and has never been restored.

On the west side of Market Hill is Great St Mary's, the Cambridge University Church, with its tower on King's Parade. On the south side of the square is the Cambridge Guildhall, built in the 1930s. To the southeast are the Grand Arcade and Lion Yard, two shopping centres.

The market is open Monday–Saturday, from 10am to 4pm.
Image Courtesy of Wikimedia and Sebastian Ballard.
Sight description based on Wikipedia.