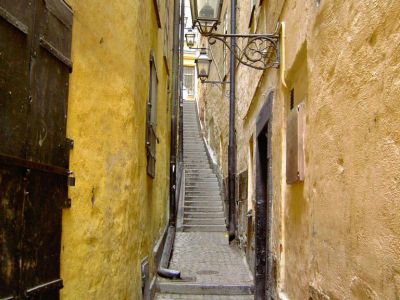 Mårten Trotzigs Gränd (“the Alley of Mårten Trotzig”) is named after the merchant and burgher Mårten Trotzig (1559–1617), who immigrated from Wittenberg, Germany to Stockholm in 1581, and eventually became one of the city's richest and most influential merchants. He traded in metals – copper and iron – and bought up properties in the alley in 1597 and 1599, also opening a shop here, thus lending his name to the place. Trotzig met his demise in 1617 when beaten to death during a trip to Kopparberg.

Unique to the area, the alley is known to be the narrowest one, measuring at its smallest part only 90 centimeters in width. Possibly referred to as Trångsund ("Narrow strait") before Mårten Trotzig gave his name to it, the alley was mentioned in 1544 as Tronge trappe grenden ("Narrow Alley Stairs"). It has 36 steps narrowing towards the top, which can be somewhat visually intimidating as the narrowing is very apparent with each step taken upwards.

In 1608, the alley was referred to as Trappegrenden ("The Stairs Alley"), but a map dated 1733 calls it Trotz gr[änd], a name which, using various alternative spellings, was to remain in use, save for an attempt in the late-18th century to inexplicably rename it Kungsgränden ("The Kings Alley"). The alley was closed off in the mid-19th century, not to be reopened until 1945. Its present name was officially sanctioned by the city in 1949.
Image Courtesy of Wikimedia and Mastad.
Sight description based on Wikipedia.