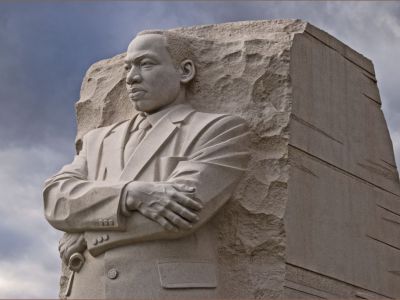 The Martin Luther King, Jr. Memorial is located in West Potomac Park in Washington DC, southwest of the National Mall. The monumental memorial is located at the northwest corner of the Tidal Basin near the Franklin Delano Roosevelt Memorial, on a sightline linking the Lincoln Memorial to the northwest and the Jefferson Memorial to the southeast. The official address of the monument, 1964 Independence Avenue, S.W., commemorates the year that the Civil Rights Act of 1964 became law, a milestone in the Civil Rights movement in which King played an important role.

Covering four acres, the memorial opened to the public on August 22, 2011, after more than two decades of planning, fund-raising and construction. A ceremony dedicating the Memorial was scheduled for Sunday, August 28, 2011, the 48th anniversary of the "I Have a Dream" speech that Dr. Martin Luther King, Jr. delivered from the steps of the Lincoln Memorial in 1963 but was postponed until October 16 (the 16th anniversary of the 1995 Million Man March on the National Mall) due to Hurricane Irene.

A 30 feet (9.1 m)-high relief of King named the “Stone of Hope” stands past two other pieces of granite that symbolize the "mountain of despair." Visitors literally "pass through" the Mountain of Despair on the way to the Stone of Hope, symbolically "moving through the struggle as Dr. King did during his life." A 450 feet (140 m) long inscription wall includes excerpts from many of King's sermons and speeches. On this crescent-shaped granite wall, fourteen of King's quotes will be inscribed, the earliest from the time of the 1955 Montgomery Bus Boycott in Alabama, and the latest from his final sermon, delivered in 1968 at Washington, D.C.'s National Cathedral, just four days before his assassination.

The relief of King is intended to give the impression that he is looking over the Tidal Basin towards the horizon (not towards the Jefferson Memorial as many believe), and that the cherry trees that "adorn the site" will bloom every year during the anniversary of King's death.

Why You Should Visit:
The memorial itself – a magnificent statue of King carved from white stone is worth checking out, but the quotes are really what make this memorial poignant.
People of all colors, creeds, religious backgrounds, ethnicities, etc., could benefit from reading – and thinking about – his many words of wisdom.

Tip:
Particularly beautiful in spring, when white blossoms on cherry trees and new-green leaves on other trees surround the memorial.
Photographers: Try to go on a cloudless day when the white stone contrasts with a clear blue sky.
Image Courtesy of Flickr and Ron Cogswell.
Sight description based on Wikipedia.