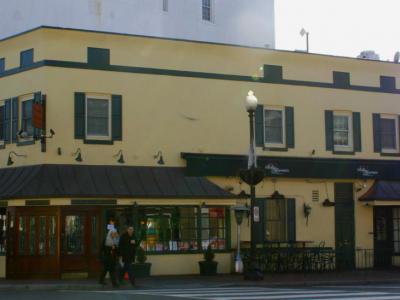 Established in 1933, Martin's Tavern is the oldest family-owned restaurant in Washington, D.C. Situated one block north from Wisconsin Avenue, in the heart of Georgetown, the tavern was founded by former Major League Baseball player William Gloyd "Billy" Martin. Over the years it has hosted pretty much every U.S. President, from Harry S. Truman to George W. Bush.

Back in the day, Martin's Tavern seemed more like a place for the older, well established, famous, and overall somewhat stodgy people. Today, this Georgetown classic, albeit seemingly unchanged for decades, appeals to the much broader crowd, and in a rather comforting way, with its dark wooden bar, oak paneling, booths, stained glass light fixtures, paintings of old-time DC and signed retro photos. Every booth within this place has its own memories, sometimes bronze plaques, and often carved initials. Booth #3 near the door is famously where, on June 24, 1953, Senator John F. Kennedy (then 36) proposed marriage to Jaqueline Lee Bouvier (aged 24) and she said yes. The young Jack Kennedy lived just two blocks away and used to come here often, on Sundays after services.

Martin's menu is a mix of American and pub food (potato skins, fish and chips, etc.), and while it isn’t life-changing, you’ll probably get a good history lesson here while eating it. Otherwise, this place is great for people watching, especially in good weather, as there are lots of outside sidewalk tables. It is very fun and surprisingly less expensive than some of the nearby Italian joints.

Tip:
There are private back rooms under the stairs reserved for people with security issues (it is Georgetown after all, mind you).
Image Courtesy of Flickr and David.