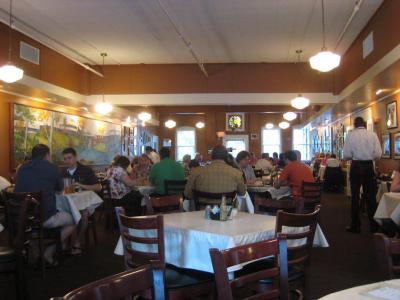 For the best "soul food" in Atlanta, you can't beat Mary Mac's Tea Room in the Midtown district. Established in 1945, just after World War II, by Mary MacKenzie, the restaurant offered true southern cooking, especially fried chicken in several modes. One of many enterprising women in search of a living, many of them widowed by the war, MacKenzie called it a "tea room" as a polite way of elevating her endeavor. Celebrated for its top notch service and down to earth atmosphere, the restaurant is known for continuing decades-old cooking traditions: every morning, the workers shuck bushels of corn, hand-wash selected greens and snap the fresh green beans by hand, while breads and desserts are baked onsite.

Famous entrees at Mary Mac's include fried chicken dredged in buttermilk and flour, fried green tomatoes, and pan-fried cube steak – but just as popular are the restaurant's non-fried items: black-eyed peas, collard greens, cheese grits, steamed cabbage & carrots, and the unbelievable peach cobbler for dessert. No one leaves hungry as portions are huge, but bear in mind that you can purchase a batch of cinnamon rolls on your way out – you won't be judged!

Additionally, the drinks menu includes two most popular drinks that can only be found in Atlanta: the Georgia Peach Martini and the Augusta Lemonade – or you could try the delicious sweet tea, referred to as "the table wine of the South".

Tip:
Be warned to go early or wait in line on weekends. Lunch during the week is usually the best time to go.