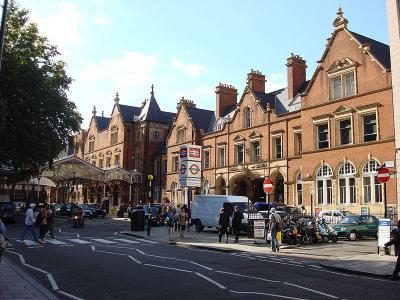 If you want to truly walk in the footsteps of John, George and Ringo, head to Boston Place (along the right side of the Marylebone Station), the setting for the opening scenes of “A Hard Day’s Night”. The station's distinctive iron and glass canopy is clearly visible in the movie – perhaps more so than the platform itself, where the three were filmed running down to catch a moving train.

The station was closed to the public on Sundays, allowing the band to film the necessary scenes without interruption. On the first Sunday, in April 1964, a horde of over 100 screaming fans were filmed chasing after The Beatles, while on the second they acted in the empty station without any crowds.

The girls hotly pursuing the Beatles were extras, but they were also Beatles fans, and they did not need to be persuaded to chase the band. While shooting the train sequences, George Harrison first met Patti Boyd, an extra at the time who later married him and experienced the height of the Beatles' popularity.
Image by Oxyman on Wikimedia under Creative Commons License.