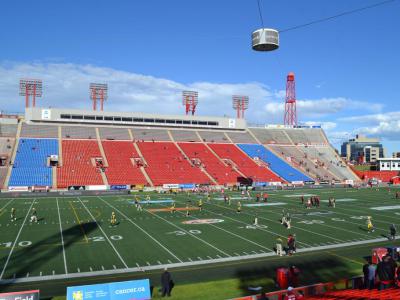 The classic match between the Montreal Canadians and Calgary Flames was held in 2011 at McMahon Stadium which served as an open air venue. Opening and closing ceremonies for the 1988 Winter Olympics was held at this stadium, too.

McMahon Stadium came into existence in 1960 replacing Mewata Park Stadium on the University of Alberta campus. Following huge donations for the Calgary citizens and to the university, the stadium was named after Frank and George McMahon. It was in 1985 that complete ownership of the stadium was transferred to the University.

McMahon Stadium has 35,650 permanent seats and is currently the fifth largest in the country. In 2006, an artificial AstroTurf playing surface was installed here to attract many other major sporting events to this field, including international soccer matches.
Image by Thivierr on Wikimedia under Creative Commons License.