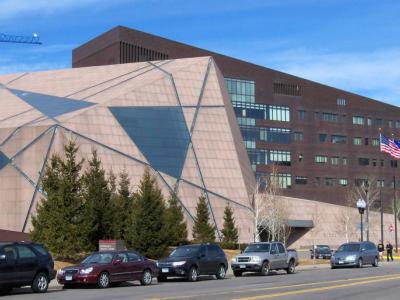 The McNamara Alumni Center is one of the more architecturally striking buildings in the Twin Cities. The building, opened in 2000, contains two main components: University office space and 10 meeting rooms for University and public use.

The landmark building occupies land formerly home to Memorial Stadium and its interior features an arch that was once an entrance to the stadium. The building opened in February 2000 and is named for Richard McNamara, a 1956 alumnus of the university and former Gopher football player.

Architect Antoine Predock was chosen in 1996 to design the structure. KKE Architects of Minneapolis served as the project's executive architect and general manager. About 75,000 square feet (7,000 m2) of copper clads the rectangular portion where university offices are located, including those of the University of Minnesota Alumni Association.

With ten versatile rooms, all on the first floor, the center is a popular Minneapolis conference, gala and wedding reception venue. Voted Best Meeting Venue by Minnesota Meetings & Events magazine 2007 to 2012, McNamara has many conveniences, including tunnel connections to an adjacent 500-car parking ramp and hotel, quick highway access and award-winning D’Amico Catering onsite.
Image Courtesy of Wikimedia and AlexiusHoratius.
Sight description based on Wikipedia.