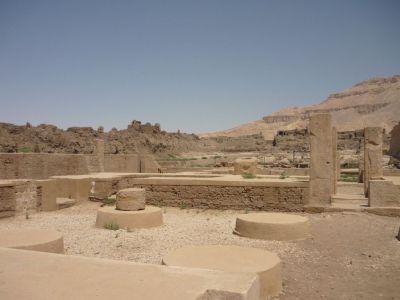 Medinet Habu is a vast complex that includes the mortuary temple of Ramses III and is second only to the Karnak Temples in size. From ancient times the site was considered holy to the Egyptians as it was believed that this was the place where the god Amun appeared for the first time. The pharaohs of the New Kingdom were buried in the Valley of the Kings, but built large temples as centers for their worship as gods following their deaths. Excavations on the site began in 1859 and continue to this day uncovering ever more fascinating relics and understanding of the past.

There are many different constructions and temples in the complex that were used as storehouses, priests’ residences, workshops and even it is thought, the Ramses III harem. The best preserved of the buildings at the complex is the Ramses III mortuary temple. Although traditional in many aspects of its architectural design, it features a unique entrance, which is thought to have been modeled after citadels the pharaoh visited on campaigns in Syria. The temple is also home to some impressive and well preserved reliefs showing Ramses III defeating his enemies, including the Libyans and Asians. These immense friezes show the many invasions that Ramses III was subjected to during his long reign.
Image Courtesy of Wikimedia and Rémih.