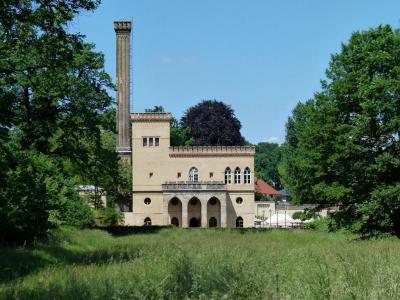 Meierei, the Dairy, was built to supply the royal court of Frederick William II of Prussia. Cows grazed on the land near the Marble Palace and landscape garden with the Meierei manufacturing butter and cheeses. It was built in 1792 by Andreas Ludwig Kruger using plans from Carl Gotthard Langhans.

A second story was added to the building in the mid-19th century. Frederick William IV hired architect Ludwig Persius and building Ludwig Ferdinand Hesse to add a tower, battlements and a pump house to the existing structure.

Meierei was no longer used as a dairy by the beginning of the 20th century. It was transformed into a popular restaurant in 1928. After World War II, the building fell into disrepair and remained unused until 1991. It was re-opened in 2003 as a restaurant and brewery, almost 200 years after its construction.

Visitors can go to Meierei for a meal or a drink during its open hours from noon to 8 PM Wednesday, Thursday and Sunday or noon to 10 PM on Friday and Saturday. The brewery serves non-alcoholic drinks like sodas, wine, coffee, teas and juices. It also serves a variety of beers, wines and mixed drinks.
Image Courtesy of Wikimedia and Oursana.