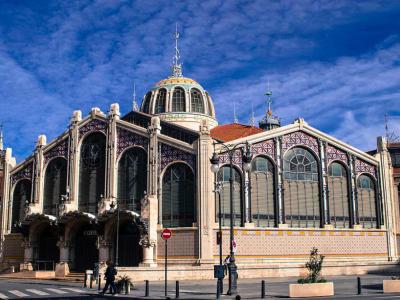 Silk Exchange is one of the most popular tourist destinations in Valencia. The building was originally used for silk trading, hence the name. Construction began in 1482 and was completed in 1533.

The Silk Exchange was designed by architect Pere Compte in the Valencian Gothic architectural style. The plans for the building were inspired by the Guild Hall in Palma of Majorca, an island east of Valencia.

The Silk Exchange is made up of three parts: the mail hall, the contract hall and the pavilion of the consulate. All of these rooms continue to use the original furnishings from the 16th century. Along with the three parts, the Silk Exchange has the Orange Garden, which is a walled courtyard.

Not only is the structure one of Valencia's most visited locations, but it also holds the honor of being a UNESCO World Heritage Site. It was given this distinction in 1996 due to its design and historical importance.

The building is located in the center of Valencia near the Central Market. Visitors who wish to spend time at the Silk Exchange will be greeted with a grand, iron gate, vaulted ceilings, ancient chandeliers, Gothic columns and fragrant orange trees. They may be able to climb the spiral staircase into the three-level tower. There is a chapel at the base of the tower that shouldn't be missed.

Silk Exchange is a historic trading center of Valencia and one of its most popular attractions. It is a perfect example of Valencian Gothic architecture