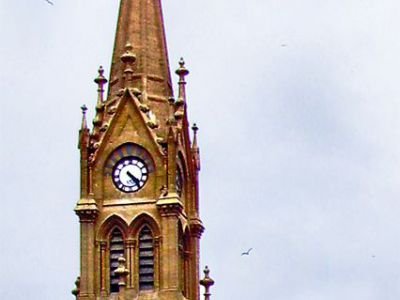 Eleanor crosses were a series of 12 monuments erected in England by King Edward I between 1291 and 1294, in memory of his wife, Eleanor of Castile. Three of the original Eleanor Crosses still exist in England. Many similar neo-Gothic style structures were built in Victorian England, and impressive clock towers are found all over Pakistan.
Image Courtesy of Flickr and Kash_if.
Sight description based on Wikipedia.

Want to visit this sight? Check out these Self-Guided Walking Tours in Karachi. Alternatively, you can download the mobile app "GPSmyCity: Walks in 1K+ Cities" from iTunes App Store or Google Play. The app turns your mobile device to a personal tour guide and it works offline, so no data plan is needed when traveling abroad.