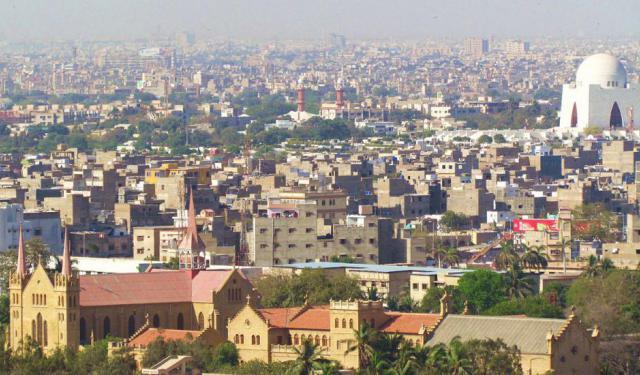 Karachi is a huge, vibrant metropolis, one of Pakistan's most secular and socially liberal. The city boasts abundant and diverse architecture, comprising both contemporary and traditional Pakistani-style buildings, such as the Merewether Clock Tower and the National Museum of Pakistan. To explore these and other prominent sites of Karachi, follow this orientation walk.
Image Courtesy of Wikimedia and Bilalhassan88.
How it works: Download the app "GPSmyCity: Walks in 1K+ Cities" from iTunes App Store or Google Play to your mobile phone or tablet. The app turns your mobile device into a personal tour guide and its built-in GPS navigation functions guide you from one tour stop to next. The app works offline, so no data plan is needed when traveling abroad.

Port Trust Building was built in 1915 and later transformed into a large hospital during World War II. The building is developed in a neo-classical renaissance style. George Wittet was the the architect behind the ingenious building.
Image Courtesy of Flickr and Xploiтєя ™.
2

Eleanor crosses were a series of 12 monuments erected in England by King Edward I between 1291 and 1294, in memory of his wife, Eleanor of Castile. Three of the original Eleanor Crosses still exist in England. Many similar neo-Gothic style structures were built in Victorian England, and impressive clock towers are found all over Pakistan.

Image Courtesy of Flickr and Kash_if.
Sight description based on Wikipedia.
3

3) Library of State Bank of Pakistan

The Library of State Bank of Pakistan was opened in 1949 and is used today for the Supreme Court Registry Office's. The lower story's of the building provide a large library. The building is decorated with columns and is truly one of the most imposing banks in Karachi.
Image Courtesy of Flickr and khoory123.
4

The New Memon Mosque is one of the most beautiful mosques in the city. The mosque features three domes and two towers on each side of the religious center. The location was once used as a graveyard, but has since became one of the most visited venues in the region.
Image Courtesy of Flickr and fahadee.
5

Lakshmi Building used to be the biggest building in Karachi. The dominant tower is used by the Lakshmi Insurance Company, which also constructed and owns several of the other famous buildings in the area. Lakshmi Building also features a large clock.
Image Courtesy of Flickr and Unhindered by Talent.
6

Max Denso Hall and Library is located at the corner of Mohammad Ali Jinnah Road and Murad Khan Road. Karachi was once a small port in the Talpur dynasty and thus developed into a major town during the conquering of the region by The British East India Company. The British realized the importance of this city as a military center and thus rapidly developed it for harboring and shipping.
Image Courtesy of Flickr and zarrar.akhtar.
7

7) National Museum of Pakistan (must see)

The Museum was shifted to the present premises in 1970. The basic objective of establishing National Museum was to collect, preserve, study, and exhibit the records of the cultural history of Pakistan and to promote a learned insight into the personality of its people. The Museum has a collection of 58,000 old coins (some dating from 74 Al-Hijra), and hundreds of well preserved sculptures. Some 70,000 publications, books and other reading material of the Archeology and Museums Department were also shifted to the National Museum so that general public could see them. Every year National Museum holds around a dozen exhibitions on National Days and other occasions.

Image Courtesy of Wikimedia and Shahid Siddiqi.
Sight description based on Wikipedia.
8

The National Academy of Performing Arts is situated on M. R. Kiyani Road, opposite the Arts Council. The academy was constructed in 1925 on a plot of land measuring 47,000 square yards. The cupolas and balustrades are directly influenced and derived from the Mughal-Hindu mixed style which characterizes Akbar's Fatehpur Sikri. It is perhaps the only example of its type left in Karachi.
Image Courtesy of Wikimedia and Asad Jugnoo.
Sight description based on Wikipedia.
9

Zainab Market is one of the cheapest markets in Karachi. Zainab offers clothes, leather, and rugs. The goods are all fabricated in Pakistan for famous brands like Adidas, Nike, and Polo. Shoppers are welcome to bargain and could successfully reduce the price to as low as 40 percent.
Image Courtesy of Flickr and ccarlstead.