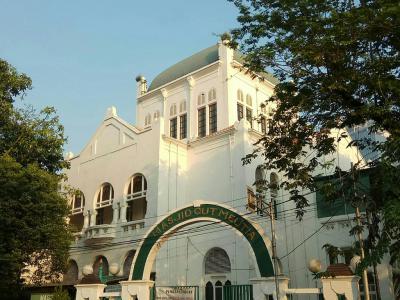 Mesjid Cut Mutiah or Cut Mutiah Mosque is probably one of the most interesting monuments in Jakarta, and one of the most nonconformist mosques in the entire world. The establishment housing the mosque was initially designed to accommodate offices of an architectural firm. Finished in 1922, this Dutch Rationalist style building was a perfect solution for the local heat and humidity conditions. This type of architecture is also known as Indies style. The central ventilation tower, specific to the Indies style, ensures a low interior temperature regardless of the outside temperature.

Prior to being transformed into a mosque, the building had functioned as a department for drinking water, post office, train company office and The Office of Home and Religion.

On 18 August 1987, the building was turned into today’s Mesjid Cut Mutiah. For this, several architectural changes have been made. In order to make room for the praying hall, the interior stairs were removed and the new ones were built in the exterior. Even so, the building does not face Kaaba, so the praying hall needed adjustments to make it suitable for religious ceremonies. Thus, mihrab and minbar had to be placed in the middle of the praying hall rather than in front of it, as they normally should be.

The mosque can be visited, but modest clothing is required. Also, visitors must take off their shoes, while women must wear scarves on their heads.
Image by fishkid on Flickr under Creative Commons License.