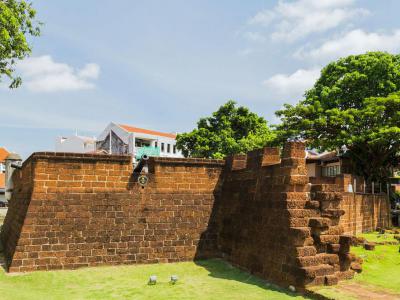 Bastion Middleburg is a 17th-century fortification overlooking the Malacca River near Dutch Square. The bastion is part of a defensive wall that used to run for 1.5 km around the historic heart of the city, encompassing important sites like St. Paul’s Church, Christ Church and the Stadthuys.

The Middelburg Bastion is the last remaining bastion out of nine that were once part of the Malacca Fortress. The Dutch name refers to the city of Middelburg, Zeeland.

Following the fall of the city from the Portuguese, in 1641, to the Dutch, new measures to ensure the security of Melaka had been taken in view of the ongoing threats from both outside and inside. The Dutch fortified the wall to further strengthen the existing line of defense, which, among other measures, involved the construction of a bastion strategically located at the mouth of Malacca River. Thus, the Middelburg Bastion was added to the already existing fortifications, left by the Portuguese, in 1660.

It was nearly entirely destroyed in 1807 by the invading British forces who formally took control of the city in 1825. What stands today is a reconstruction of the original structure based on historical documents and excavation works to establish the exact location of the original walls.

The reconstruction, however, was not without controversy. Some of the local historians argued that the replica is much smaller than the original. Nonetheless, restored completely with its cannons, the Middleburg Bastion offers an excellent glimpse into what the fortress would have looked like in the 17th century. It is open to visitors all year round; the admission is free.
Image Courtesy of Wikimedia and Marcin Konsek.
Sight description based on Wikipedia.