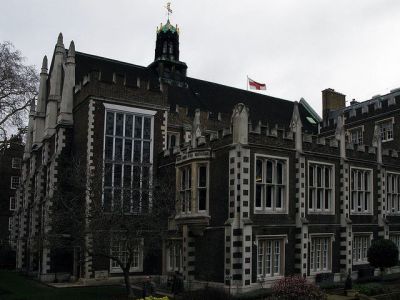 Stepping into the Middle Temple is like stepping back into Dickensian London. Dickens wrote of it: “You can read on its gates: ‘Who enters here leaves noise behind’.” Over the centuries, a host of historic figures, such as Charles Dickens himself as well as Sir Walter Raleigh, William Makepeace Thackeray and others, became members of the Middle Temple.

At Middle Temple Hall, South of New Court and Essex Court, lies Fountain Court with its monkish atmosphere, ducked into which the law students often dine. The fountain here is mentioned by Dickens in "Martin Chuzzlewit".

Another lovely spot is the Garden Court, a leafy plaza within a view of the Thames, which appears in "Great Expectations". This is where Pip, the main character, was living when the convict Abel Magwitch turned up one night to reveal a life-altering secret. In the book, Pip says, “We lived at the top of the last house and the wind rushing up the river shook the house that night, like discharges of cannon or breakings of a sea.” Pip comes home on that storm-lashed night and gets a message at the gate of the Temple: Don’t go home. But of course he does...
Image by wit on Flickr under Creative Commons License.