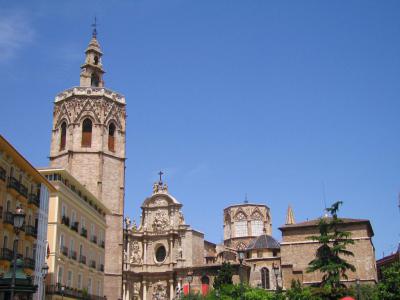 The Miguelete Tower is the bell tower of the Cathedral of Valencia. It is known as El Miguelete or Torre del Micalet in Valencian . The construction of the tower began in 1381 and ended in 1429 . Due to its complexity and long years of construction, it was successively directed by various master builders; the first being Andrés Juliá , from 1381. Others were José Franch (1396), Pedro Balaguer (1414, builder of the Torres de Serranos); to Martín Llobet (1425), the last of the architects who took part in the construction. Later the belfry was added (1660-1736).

The popular El Miguelete tower is accessible every day of the year by purchasing a ticket. After the performances of the Guild of Valencian Bellmen first and the Bellmen of the Cathedral of Valencia later, visitors can see the three rooms of the bell tower through bars, and finally go up to the terrace.
Image Courtesy of Wikimedia and Felivet.
Sight description based on Wikipedia.