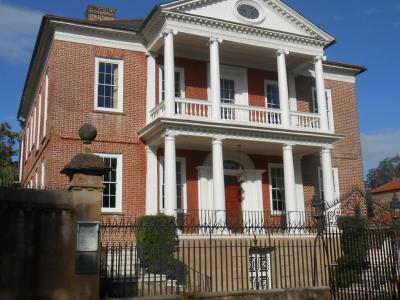 A short distance from the Nathaniel Russell House, this circa-1760s double house (a reference to the arrangement of four main rooms per floor, separated by a central stair hall) built for Miles Brewton, a wealthy slave trader and planter, is perhaps the best example of Georgian-Palladian architecture in the world. The sinister, medieval-looking spikes running along the top of the gates and fence were added much later, in the 1820s, after rumors of a slave uprising spread through town.

The imposing house, now a private residence, was the site of not one but two headquarters of occupying armies, that of British general Henry Clinton in the Revolution and the federal garrison after the end of the Civil War. Located on two acres, its extensive collection of dependencies makes it one of the most complete Georgian townhouse complexes in America.

On the north side of the house is what is referred to locally as a "plantation lane", along which the property's outbuildings are located. These include period slave quarters, a kitchen, and a pavilion, all joined by an arcade. The large garden space directly behind the house retains its basic 18th-century layout.
Image by ProfReader on Wikimedia under Creative Commons License.

This sight is featured in a self-guided walking tour of Charleston, South Carolina within the mobile app "GPSmyCity: Walks in 1K+ Cities" which can be downloaded from iTunes App Store or Google Play. Please download the app to your mobile phone or tablet for travel directions for visiting this sight. The app turns your mobile device to a personal tour guide and it works offline, so no data plan is needed when traveling abroad.