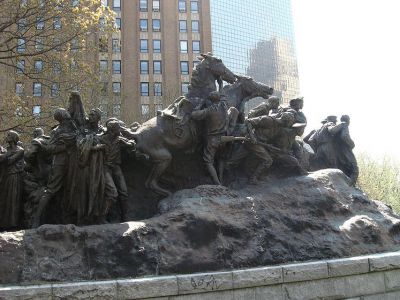 Military Park is a 6-acre (24,000 m2) city park in downtown Newark. It is a nearly triangular park located between Park Place, Rector Street and Broad Street. From 1667, when the city was planned, until 1869 it was a training ground for soldiers. In 1869 it became the town commons.

In the southwestern part of the park is the colossal Wars of America monument, created by Gutzon Borglum, the sculptor of Mount Rushmore. The sculpture itself forms the base of a large concrete sword built into the ground. The sword from the ground resembles a large dry fountain and from the air its shape is easily distinguished. The sword is about eighty yards long from the end of the statue to its tip; the blade is over ten feet across at its base. A bust of John F. Kennedy was erected in 1965.

The park also has an old drinking fountain with the phrase "My cup runneth over" carved around its base, and statues of Frederick Frelinghuysen and Philip Kearny. A three-level underground parking garage is beneath the park. A subway station, Military Park Station, lies under the southwest end of the park at Raymond Boulevard and Park Place.
Image by Jim.henderson on Wikimedia under Creative Commons License.
Sight description based on wikipedia