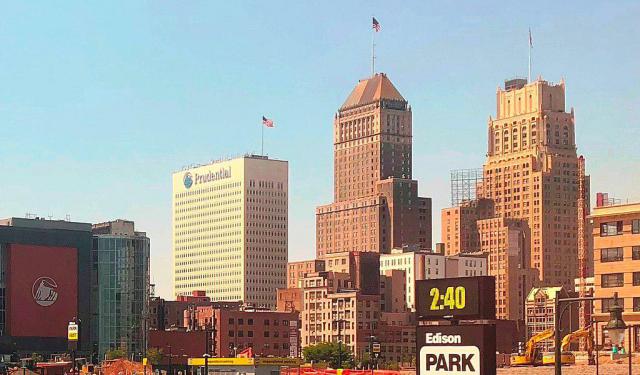 Newark, the most populous city of New Jersey, is a major transportation hub, but also home to a number of cultural and historic attractions. Among them the New Jersey Performing Arts Center (NJPAC), a venue for big-name concerts and shows, as well as Newark Museum, holding a vast collection of American paintings and sculptures. To learn what else is there to see in Newark, follow this orientation walk and find out.
Image Courtesy of Wikimedia and Bjoertvedt.
How it works: Download the app "GPSmyCity: Walks in 1K+ Cities" from iTunes App Store or Google Play to your mobile phone or tablet. The app turns your mobile device into a personal tour guide and its built-in GPS navigation functions guide you from one tour stop to next. The app works offline, so no data plan is needed when traveling abroad.

Newark City Hall, is located at Government Center. The building was built in 1902 and was added to the National Register of Historic Places on February 17, 1978. The building is a five story Beaux Arts style building with a golden dome; built at a cost of $2.6 Million. The interior of the building features carved marble, a grand central staircase, stained-glass skylights, decorative plaster and wrought-iron works. Developer Harry Grant paid to have the dome covered in 24 carat gold in 1986. Newark City Hall was renovated in 2006 at a cost of $18 Million.
Image Courtesy of Flickr and dandeluca.
Sight description based on Wikipedia.
2

Newark Symphony Hall at 1020 Broad Street was built in 1925 and added to the National Register of Historic Places in 1977. It was known for many years as The Mosque Theater. Originally built by the Shriners at a cost of more than $2 million as Salaam Temple and colloquially known as The Mosque, the four-story building has been Newark Symphony Hall since 1964.

The interior features a Greek and Egyptian motifs, marble columns, a crystal chandelier, gold-leaf fret work and two-columned side promenades. The neo-classical building was design by Frank Grad, a prominent Newark architect, whose work includes the Lefcourt Newark Building and many others downtown. The 3,500-seat main concert hall is named for Sarah Vaughan, a native Newarker, and is renowned for its acoustics. Newark Stage is a 200 seat black box theater used by theatrical productions. The Terrace Ballroom is used for receptions. The Studio is a rehearsal space. The Dance Studio is home to one of three facilities in the state used by the school of the Garden State Ballet, founded in 1951.

Image Courtesy of Flickr and pasa47.
Sight description based on Wikipedia.
3

At the intersection of Springfield Avenue and Market Street, in front of the Essex County Courthouse, you will find a statue of Abraham Lincoln, the 16th President of the country. The sculpture was created by Gutzon Borglum and depicts the prominent American personality seating on a bench.
Image Courtesy of Wikimedia and Jim.henderson.
4

The intersection of Broad and Market Streets is known as one of the busiest in the country, and was used by early settlers; it was the city's central crossroad of the major north-south and east-west arteries. This "Four Corners" was the main driving force behind the city of Newark's planning in 1666.
Image Courtesy of Wikimedia and Derek Jensen.
5

Ironbound is an unincorporated community and neighborhood within the city of Newark in Essex County, New Jersey, United States. It is a large working-class, close-knit, multi-ethnic community. Today, the Ironbound is known for being a Portuguese neighborhood.

The Ironbound is one of Newark's most vibrant neighborhoods. There are almost no vacant stores along Ferry Street, its commercial heart. The neighborhood has a mix of different home styles, from apartments in multifamily dwellings to single-family houses on small lots to two family homes. Many old industrial sites have been converted to modern detached townhouses.

Image Courtesy of Flickr and Paul Sableman.
Sight description based on Wikipedia.
6

Military Park is a 6-acre (24,000 m2) city park in downtown Newark. It is a nearly triangular park located between Park Place, Rector Street and Broad Street. From 1667, when the city was planned, until 1869 it was a training ground for soldiers. In 1869 it became the town commons.

In the southwestern part of the park is the colossal Wars of America monument, created by Gutzon Borglum, the sculptor of Mount Rushmore. The sculpture itself forms the base of a large concrete sword built into the ground. The sword from the ground resembles a large dry fountain and from the air its shape is easily distinguished. The sword is about eighty yards long from the end of the statue to its tip; the blade is over ten feet across at its base. A bust of John F. Kennedy was erected in 1965.

The park also has an old drinking fountain with the phrase "My cup runneth over" carved around its base, and statues of Frederick Frelinghuysen and Philip Kearny. A three-level underground parking garage is beneath the park. A subway station, Military Park Station, lies under the southwest end of the park at Raymond Boulevard and Park Place.

Image Courtesy of Wikimedia and Jim.henderson.
Sight description based on Wikipedia.
7

Exhibitions can be found on the second and third floor while the library reading room is housed on the fifth floor, formerly the Essex Club squash courts. The Society is open to the public. Members are free, while non-members pay an admission fee. Patrons visiting the library are encouraged to make an appointment.

The society was founded in 1845 at Trenton by intellectual and business leaders of New Jersey, most prominently Joseph C. Hornblower, Peter D. Vroom and William Whitehead. Its original headquarters in Newark were located on Market Street, In 1931 it left Downtown Newark for a large colonial-style building partially paid for by Louis Bamberger in Broadway, east of Branch Brook Park.

In 1997 the Historical Society returned downtown, to 52 Park Place, on Military Park. The new home is a Georgian style building vacated by the Essex Club that was designed by Guilbert & Betelle. The building was built in 1926 and had been added to the National Register of Historic Places on February 22, 1991. In its first year in the downtown location visits increased almost fivefold.
Image Courtesy of Flickr and USVIZION.
Sight description based on Wikipedia.
8

The New Jersey Performing Arts Center (NJPAC), in downtown Newark, is one of the largest performing arts center in the United States. Home to the Grammy Award-winning New Jersey Symphony Orchestra (NJSO), more than 6 million visitors (including more than one million children) have visited the center since it opened in October 1997. NJPAC has been an important component in revitalization of New Jersey's largest city. Located just west of the Passaic River waterfront, the Center lies in the heart of the city's cultural district around Military Park and Washington Park that also includes the Newark Museum, New Jersey Historical Society, and the Newark Public Library. The Prudential Center is just to the south.

NJPAC has one of the largest arts education programs offered by a performing arts center in the nation. The program includes arts training classes, scholarships, in-school residencies, professional development, and family and children's programming, allowing students, teachers and families to interact with professional artists and explore the various genres of music, theater, dance, poetry and more.

Construction of the building began in 1995 and was completed in 1997, receiving rave reviews by The New York Times architecture critic Herbert Muschamp upon its opening. The New Yorker has said that it houses one of the best modern concert halls on the Eastern Seaboard - handsome in appearance, warm in sound.
Image Courtesy of Wikimedia and Darkcore.
Sight description based on Wikipedia.
9

9) Aljira, a Center for Contemporary Art

Aljira, a Center for Contemporary Art, is located on Broad Street, in the downtown Newark arts neighborhood. The gallery was founded as a Major Arts Organization by the NJ State Council of the Arts. Dedicated to modern art, this cultural venue offers various changing exhibitions and educational programs and promotes visual art.
Image Courtesy of Wikimedia and Jennifer R..
10

The Pro-Cathedral of Saint Patrick in Newark is a former cathedral of the Roman Catholic Church in the United States. It was built in 1846. It served as the seat of its prelate bishop until the completion of the Basilica of the Sacred Heart on Clifton Ave. It is currently served by Msgr. Neil Mahoney and Deacon Leonides Aponte. Its history can be read on Msgr. Robert Wister's page, who assists on the weekends. Also assisting on a regular basis are Frs. Chris Hynes, Chris Anyanwu, and many others who have over the years called St. Patrick's their home. The Liturgy is celebrated on Saturdays at 4pm, Sundays at 9:15am, and, in Spanish at 10:30am. During the school year, a students' Mass is celebrated at 7pm in the chapel thanks to the efforts of the Rutgers-NJIT Newman Club.

The building itself is on the national register of historic sites, and has undergone extensive rehabilitation over the past fifteen years following years of declining membership. Several traditions remain, connecting the parish to its history as the "Old Cathedral" of Newark, including the 12:15 Ash Wednesday Liturgy with the Archbishop, the 12:15 Sunday Liturgy on Easter in memory of the 1916 Easter Rising in Dublin, the annual Newark Fire Department memorial Mass, and many other archdiocesan and Irish-heritage events. The parish is also the national shrine to Our Lady of Quinche.
Image Courtesy of Wikimedia and Jim.henderson.
Sight description based on Wikipedia.
11

The Newark Museum is the largest museum in New Jersey. It holds fine collections of American art, decorative arts, contemporary art, and arts of Asia, Africa, the Americas, and the ancient world. The Newark Museum's Tibetan galleries are considered among the best in the world. The collection was purchased from Christian missionaries in the early twentieth century. The Tibetan galleries have an in-situ Buddhist altar that the Dalai Lama has consecrated.

In addition to its extensive art collections, The Newark Museum is dedicated to natural science. It includes the Dreyfuss Planetarium and the Victoria Hall of Science which highlights some of the museum's 70,000 specimen Natural Science Collection.

The Alice Ransom Dreyfuss Memorial Garden, located behind the museum, is the setting for community programs, concerts and performances. The garden is also home to a 1784 old stone schoolhouse and Fire Safety Center. The museum was organized in 1909 by master Newark librarian John Cotton Dana. The kernel of the museum was a collection of Japanese prints, silks, and porcelains assembled by a Newark pharmacist. The Museum had a mini-zoo with small animals for some twenty years, until August 2010.

Washington Park is a prominent city park that boasts a number of landmarks. The park was created in 1666 and is bordered by Washington Street, Broad Street and Washington Place Street. Here you will find a stone with a marker, which tells that the city’s first academy was built nearby in 1774. Another sight presents Washington's Retreat Marker, indicating the route of Washington's army. In the center of the park you will find the city’s oldest statue of Seth Boyden, an American inventor. Not far from this place you will see the Christopher Columbus Monument, erected in 1927.
Image Courtesy of Wikimedia and Jim.henderson.