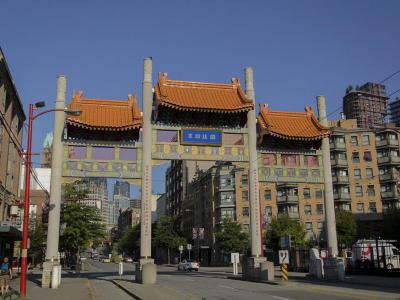 Vancouver's Millennium Gate sits at the entrance of Chinatown, and was built to honour the people of China and the role they have played in Vancouver's long, colourful history. The name derives from the fact that the gate was constructed in 2002 to mark the turn of the millennium.

The four pillar-, three story tall gate is guarded by two stone foo lions, one male with a ball under his paw on the left side, and a female with cub on the right side. Images of Chinese people adorning the gates show different styles of clothing worn across China. One interesting feature of the Millennium Gate is its colour scheme, since it's a blend of traditional Eastern and modern Western motifs. The gates feature the traditional colours of red, yellow, and gold, as well as white and blue colours that are traditionally reserved for funerals.

Vancouver's Chinatown is a living symbol of its multicultural heritage. It serves as a place where people of every ethnicity gather to visit shops and restaurants, and its people are an integral part of the community. Nowhere is that more evident than in the design of the Millennium Gate.
Image Courtesy of Wikimedia and Boris Kasimov.