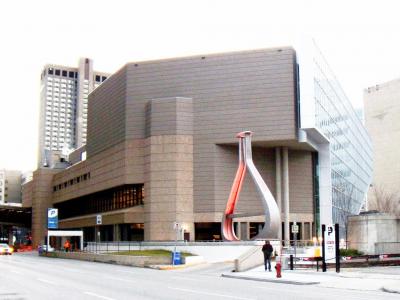 Millennium Library is a reconstructed Centennial Library that was the main public library in Winnipeg, known as the Centennial Library, from 1977 until 2005. In November 2005 the Millennium Library opened its doors in the heart of the city for those who were fond of reading. The building was designed by Patkau Architects and LM Architectural Group. The four storey library boasts a Local History Room, public art, information displays, a grand staircase, as well as access to the Winnipeg Walkway system. There is a small coffee and a gift shop situated in the building. The is a couple of public art installations, viewable in and around the Millennium Library.
Image by Dan McKay on Wikimedia under Creative Commons License.
Sight description based on wikipedia

Want to visit this sight? Check out these Self-Guided Walking Tours in Winnipeg. Alternatively, you can download the mobile app "GPSmyCity: Walks in 1K+ Cities" from iTunes App Store or Google Play. The app turns your mobile device to a personal tour guide and it works offline, so no data plan is needed when traveling abroad.

Saint Boniface is the historic French quarter where there are many famous Winnipeg’s religious, social and historical landmarks, as well as the largest French community. Its unique architecture, cozy cafes and numerous shops will make it an unforgettable experience. Take the following walking tour to discover the most prominent landmarks of Saint Boniface in Winnipeg.