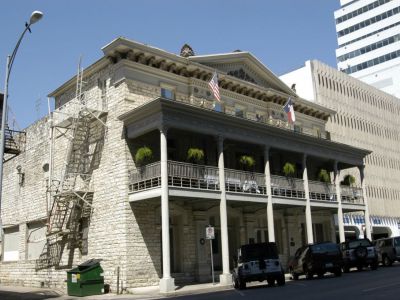 The Millett Opera House is a historic building in downtown Austin, Texas. Built in 1878 by local lumber seller Charles Millett on one of his lots, the house was one of the largest performance spaces in Texas upon its completion. It featured 800 removable seats, 24-inch limestone walls, and the largest enclosed space in Texas. The Opera House was designed by Frederick Ruffini, a noted architect working throughout Texas.

The Austin Public Free Schools purchased the opera house in 1940. In the 1950s, it was threatened with demolition, but preserved by a local group of concerned citizens. It housed a printing company until 1979.

The Austin Club renovated the building and continues to hold social events here today. The building has been divided into three stories, removing the performance space, but a portion of the original hand-painted ceiling is still installed in one of the meeting rooms.
Image by Dtobias on Wikimedia under Creative Commons License.
Sight description based on wikipedia