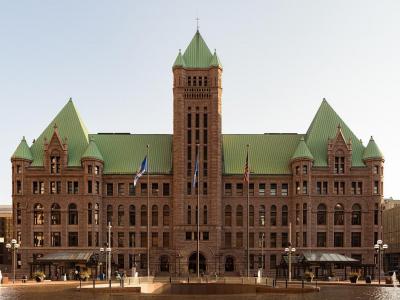 Minneapolis City Hall and Hennepin County Courthouse, or Municipal Building, designed by Long and Kees in 1888, is the main building used by the city government of Minneapolis, as well as by Hennepin County. The structure has served many different purposes since it was built, although today the building is 60 percent occupied by the city and 40 percent occupied by the County. The City Hall and Courthouse was added to the National Register of Historic Places in 1974.

City Hall is built of Ortonville granite, with many stones greater than 20 tons in weight. nside, on the 4th Street side, there is a large five-story rotunda including a large sculpture, "Father of Waters," by American sculptor Larkin Goldsmith Mead. Originally, the building had a red terra cotta roof, but it began leaking so a copper roof was installed. At 180,000 pounds, it was said to be the largest in the country.
Image Courtesy of Wikimedia and Tony Webster.
Sight description based on Wikipedia.