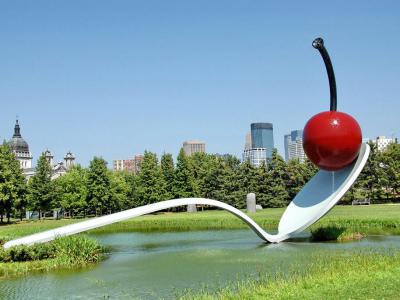 The Minneapolis Sculpture Garden is an 11 acre (45,000 m²) park, located near the Walker Art Center, which operates it in coordination with the Minneapolis Park and Recreation Board. It is one of the largest urban sculpture gardens in the country, with 40 permanent art installations and several other temporary pieces that are moved in and out periodically.

The land was first purchased by the park board at the turn of the century, when it was known as "The Parade" because it had been used for military drills. It became known as the Armory Gardens after park superintendent Theodore Wirth created a formal design that included a U.S. National Guard armory (Kenwood Armory) for Spanish War Volunteers. In 1988, the Minneapolis Sculpture Garden opened, designed by Edward Larrabee Barnes and landscape architects Quinnel and Rothschild. In 1992, the Garden was expanded, adding 3½ acres. Michael Van Valkenburgh and Associates, Inc. designed the northward extension to complement the original space with a more open area that features a walkway and the 300-foot-long Alene Grossman Memorial Arbor.

The centerpiece of the garden is the Spoonbridge and Cherry (1985–1988) water sculpture designed by husband and wife Claes Oldenburg and Coosje van Bruggen. The grounds also include the Cowles Conservatory, which has more flora and sculpture inside, such as Frank Gehry's Standing Glass Fish. A pedestrian bridge, the Irene Hixon Whitney Bridge (1987), designed by Siah Armajani now crosses I-94, once again connecting the sculpture garden to Loring Park.
Image Courtesy of Flickr and FaceMePLS.
Sight description based on Wikipedia.