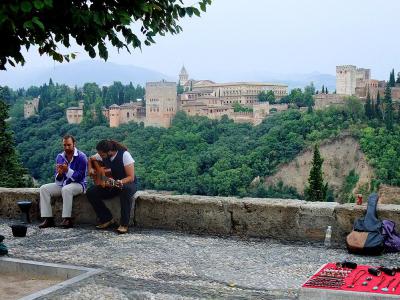 Bill Clinton is supposed to have said "the most beautiful sunset in the world" when speaking of the sunset view from San Nicolas Lookout. San Nicolas does offer the best view of the Alhambra at sunset, but there are a lot of spectacular lookouts in Granada. San Cristobal is reputed to be a fantastic viewpoint of the City.

Each clear day at sunset there is a crowd gathering in the square of San Nicolas. They are there to watch the Alhambra turn red in the setting sun. Alhambra in Arabic means "red castle." Tourists, locals, and travelers come together at the overlook. There are vendors hawking snacks, flamenco dancers, souvenir sellers and other entertainments.

The lookout is named for San Nicolas Church and Square. The church was built on the top of a mosque in 1525. There seems to have been a trend, when the Catholic Monarchs took over in 1491, to drop a church on a mosque. Location, location, the man said. The church has been destroyed several times by fires, but the original bell tower survives.

For only a few euros it is possible to climb the tower San Nicolas and get a better view.
Image by Nikater on Wikimedia under Creative Commons License.