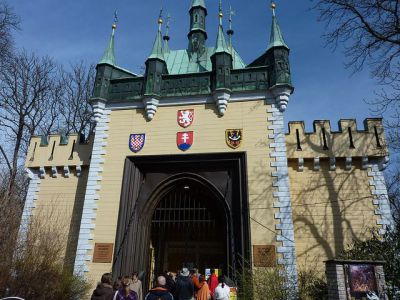 Whilst on Petrin Hill, you are bound to spot this curious building. A replica of the Spicka gateway of the 10th-century Vysehrad Castle, this is the home of the Mirror Maze which was introduced at the Jubilee Exhibition of 1891 and then moved to Petrin Hill in 1892.

If you care to spend a few hours in a really fun way, befitting not only the kids, this is it! First, you must make your way through a confusing labyrinth of the maze itself which comprises 31 ordinary mirrors. There were once 35 mirrors in place, but four of them have been broken over the years never to be replaced.

After the maze, you will come into a room with a wonderful diorama depicting the Battle of Charles Bridge of 1648, during which the invading Swedes were repulsed by the citizens of Prague. This magnificent painting, measuring 80 square meters, was executed by Adolf and Karel Liebscher in the course of just 50 days!

Another room, the Laughter Hall, has earned its name well. It features 14 convex and concave mirrors that distort one's reflection into a myriad of very funny shapes and sizes. The Mirror Maze is open daily, from April to October, and the entrance fee is quite reasonable.

Why You Should Visit:
A good way to have some fun and a laugh.

Tip:
You can walk in as many times as you like.