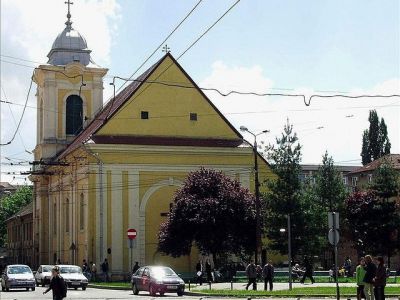 Known as the Misericordians Church, the current building of the Greek Catholic church, in Piata 700 dates back to 1851. But its history is older. St. John of Nepomuk Religious Association built a hospital between 1735 and 1737, which was subsequently taken over by the misericordian monks. In addition to the hospital, which at that time had only one floor in the Baroque style, the Roman Catholic Church was built between 1748 and 1753. The complex, which at the time sheltered the hospital, a pharmacy and a library, was destroyed during bombing in 1849, when the town was attacked by Hungarian revolutionaries. Rebuilt in 1851 and then dismantled in 1948, the church was taken over by the Greek Catholic Church.
Image by Székely Attila on Flickr under Creative Commons License.

Architecture in Timisoara, Part I