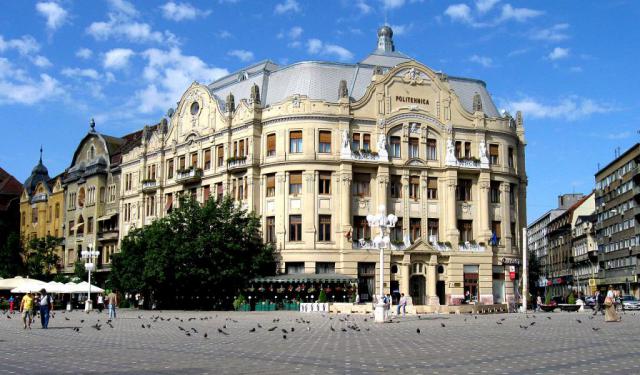 The “Little Vienna” has amazed thousands of curious eyes for many years. This is thanks to the stunning palaces built in various styles, meant to lure visitors from all over the world. Take this tour to appreciate the most important historical buildings in Timisoara.
Image Courtesy of Wikimedia and Turbojet.
How it works: Download the app "GPSmyCity: Walks in 1K+ Cities" from iTunes App Store or Google Play to your mobile phone or tablet. The app turns your mobile device into a personal tour guide and its built-in GPS navigation functions guide you from one tour stop to next. The app works offline, so no data plan is needed when traveling abroad.

Hilt Palace or Hilt & Vogel is a historical building in Piata Victoriei, Timisoara. It was built between 1912 and 1913 according to architect László Székely's plans. The style, which is quite diverse among the buildings in Timisoara, is Art-Nouveau and makes the building fit in well with the city’s architectural collection.
Image Courtesy of Wikimedia and Radufan.
2

Szechenyi Palace is a historical monument which was built between 1900 and 1914 by Szechenyi Society, according to architect László Székely's plans. It is a four-level building with balconies and a tower at its corner. During the Revolution in December 1989, scenes occurring in front of the Cathedral were recorded from one the building’s windows; its historical importance is evident. The palace is located on the “Corso” side of the Victory Square.
Image Courtesy of Wikimedia and Al.
3

Dauerbach Palace was built in 1913 for Georg Dauerbach, who in 1911 bought an empty property 1240 square meters big; his aim was to build a house with places for rent. The architect of the building was László Székely, a well known specialist at that time. The Dauerbach Palace is one of the many Timisorean buildings designed by Székely.
Image Courtesy of Flickr and Attila Székely.
4

The Merbl Palace is a Grade II listed building on Piata Victoria. The three-storey palace was built in 1911, designed by architect Arnold Merbl in an eclectic style with elements of Baroque and Art Nouveau (Vienna Secession). On the ground floor of the building is the Mihai Eminescu Bookshop.
Image Courtesy of Wikimedia and Radufan.
5

Neuhausz Palace is a historical building in Piata Victoriei, Timisoara. It was built following László Székely’s architectural plans in a combination of eclectic, secession and Hungarian Art Nouveau. The palace is a symmetrical, four-storey building; the middle part of the façade, which stands out, is covered with a copper roof.
Image Courtesy of Wikimedia and Radufan.
6

Lloyd Palace is a monumental venue, which was built between 1910 and 1912, according to the plans of architect Leopold Baumhorn. The building’s architecture is eclectic with influences of secession. Before the Second World War, on the palace’s ground floor there was a Café, where the city’s elite would meet. Today, the palace serves as the seat of the Polytechnic University’s rector.
Image Courtesy of Wikimedia and Turbojet.
7

Weiss Palace, which was built in 1912, is located at the beginning of Republicii Avenue. The building was designed by Arnold Merbl Co. and the gable is the result of Székely László’s efforts. Weiss Family had many well known personalities in Timisoara that were doctors and businessmen; this building’s construction was a profitable deal for them.
Image Courtesy of Wikimedia and Uzo19.
8

Löffler Palace from Piata Victoriei was built between 1912 and 1913 by the family and firm of businessman Leopold Löffler, in order to serve as firm headquarters and home for him and his three sons. The Palace is a four-storey construction with beautiful façades; the one which faces Piata Victoriei has a much more simple design.
Image Courtesy of Wikimedia and Radufan.
9

Huniade Castle is the oldest building in Timisoara. It was built between 1443 and 1447 by Iancu de Hunedoara, on the ruins of an old castle from the 14th century. Despite numerous changes, the castle kept its boundaries within a quadrangle yard, the position of the donjon tower and “Knights Chamber”. The castle’s tower has a rectangular form, small height and little windows; the roof is not visible, due to some decorations at the top.
Image Courtesy of Wikimedia and Radufan.
10

Dejan Palace or Deschan, also known as the Scherter Palace, is an edifice in Timisoara built in 1735 by councillor Deschan in Neoclassical style. Its name comes from the family of French origin de Jean, who subsequently changed his name to Deschann de Hansen. Later the first bazaar was founded in Timisoara. The palace was returned after the revolution and in recent years, has changed owner and has been completely renovated.
Image Courtesy of Flickr and Attila Székely.
11

Dicasterial Palace houses the headquarters of Timisorean Court, Timis Tribunal and Court of Appeal. It was built between 1855 and 1860 and it was originally designed to serve as the residence of Banat’s governor. The palace is a monumental construction, which for a long time, was the grandest building in Timisoara, due to the fact that it was built on a long, three-street stretch. At the beginning, the palace had 273 offices, 34 rooms for servants, 34 kitchens, 65 cellars, 27 warehouses; all of these were grouped within three interior yards. The building was raised in the Italian Renaissance style, imitating the Medici Palace in Florence.
Image Courtesy of Wikimedia and Radufan.
12

Baroque Palace is a historical building located in Piata Unirii. Since its construction, the palace served several purposes, namely military and administrative. In the present time, the palace houses the Museum of Art; the features of the building contributed to its election for the museum’s location.
Image Courtesy of Wikimedia and Dr-Victor-von-Doom.