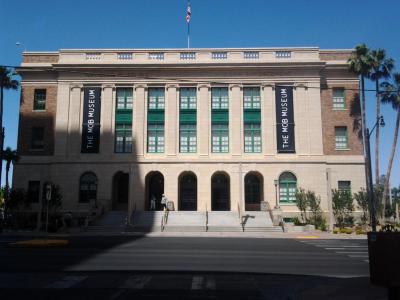 The Mob Museum, officially known as the National Museum of Organized Crime and Law Enforcement, is dedicated to presenting the artifacts, stories, and history of organized crime in the United States, as well as the actions and initiatives taken by law enforcement to prevent such crimes. Opened on February 14th, 2012, the museum is housed in the former Las Vegas Post Office and Courthouse which was built in 1933 and is currently listed on the National Register of Historic Places.

In April 2018, a fully operational speakeasy and distillery was opened at the museum's basement, called The Underground exhibit, paying homage to the Prohibition-era speakeasies with Art Deco design and artifacts from the 1920s related to the Prohibition era as well as the bootleggers, rumrunners, and moonshiners who ensured Americans still had access to liquor during the 13 years of federal “dry” season. The most notable feature of the Underground is a custom-built pot used for distilling in-house 100 proof, 100% corn moonshine which, they say, is “as authentic as it can safely get.” In 2019, the Mob Museum started selling their moonshine – previously available only at The Underground – through Lee's Discount Liquor stores in the Las Vegas Valley.

Indeed, what a better place for a speakeasy than in the basement of the Mob Museum? Each day the museum runs 30-minute tours of the Underground facility, starting at 5 pm. To access The Underground, patrons must ring a bell and provide a password. Once inside, they can order classic cocktails and moonshine, and enjoy live jazz.

Why You Should Visit:
To explore artifacts from law enforcement's epic battle against the bad guys, to sample a variety of in-house distilled spirits (moonshine, vodka and the Jamaica ginger infusion), plus to receive an in-depth explanation of the distillery equipment and distillation process (Prohibition-era bootlegging and rum running), and to learn more about Prohibition and its impact on distilled spirits.

Tip:
Consider adding the firearms simulator option, for it helps to learn more about how a police officer must be prepared to make a life/death split-second decision.
Image Courtesy of Wikimedia and Wtstoffs.
Sight description based on Wikipedia.