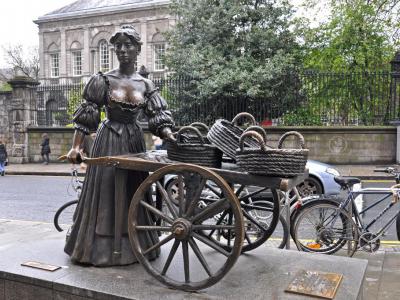 The Molly Malone Statue, by Jean Rynhart, is a rather controversial piece of sculpture set up on Grafton Street during the 1988 Dublin Millennium festivities.

The controversy arose after the unveiling of the statue: Jean Rynhart presented Molly as a young woman with large breasts all but falling out of her low-cut dress. According to the famous song, “sweet Molly Malone” was a fishmonger, but stories add that she was also a part-time prostitute.

Other stories relate that she was one of the few chaste street sellers of the 17th century. For those who believe in the “chaste” story, the statue is an affront to women; to others the statue has been dubbed “The Tart with the Cart” or “The Dish with the Fish”.

No matter, as Molly Malone the fishmonger probably never existed anyway. The song which first appeared in the 19th century is a mystery too. It has none of the airs of a traditional Irish street ballad and some say its origins are Scottish, while others say it is a Victorian music hall ballad. It is a song associated with Dublin because of the first line “In Dublin’s fair city” and has practically become a second national anthem. Since 1988, the 13th of June has been officially labelled Molly Malone Day.
Image Courtesy of Flickr and Jennifer Boyer.
Sight description based on Wikipedia.