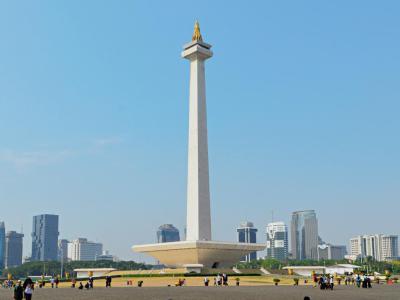 Designed by architects Frederich Silaban (the same architect who designed Istiqlal Mosque) and R.M. Soedarsono and built during the first Indonesian president, Sukarno, the Monas or National Monument is meant to commemorate the Indonesian people who fought for the national independence. The monument encapsulates Indonesian symbols such as the rice pestle (the upper part of the monument) and the mortar (the lower part of the monument), the numbers 17, 8 and 45 (August 17th, 1945 – the date when Indonesia’s Independence was proclaimed) and a gold plated flame called the Independence Flame, a pledge that the country will always remain an independent territory.

The monument measures 132 meters in height and features a larger part at the bottom (interpreted as the mortar or the yoni – female reproductive organs) and a high upper part (representing the pestle or the lingga – the phallus). In traditional beliefs, the monument is also a sign of people’s fertility and its power of surviving throughout the time.

The top part offers tourists a panoramic view over Jakarta. In sunny days, the ocean and Salak Mountain can be admired from the Observation Platform located on top of the monument, near the gold plated flame.
Image by Victor Ulijn on Flickr under Creative Commons License.