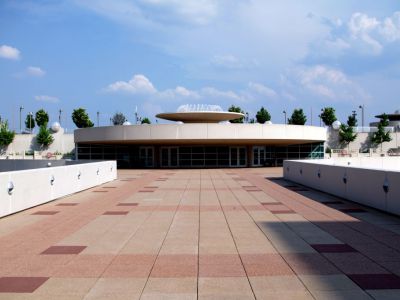 Monona Terrace (officially the Monona Terrace Community and Convention Center) is a convention center on the shores of Lake Monona in Madison, Wisconsin.

Originally designed by Wisconsin native Frank Lloyd Wright, it was first proposed by Wright in 1938. The county board rejected the plan by a single vote. Wright would continue to seek support for the plan (and alter its design) until his death in 1959. For the next four decades, various proposals for a convention center on the Monona Terrace land would be considered and rejected. Several times, it appeared that supporters of the project would be able to secure the public financing to complete the project, but various forces (such as the start of World War II) inevitably sidelined the plan. In 1990, Madison Mayor Paul Soglinresurrected Wright's proposal. Among the arguments against its construction, opponents argued that it wasn't a genuine Wright building, that the costs were too steep for the tax payers to bear and that the construction would adversely affect the environment, specifically destroying the view of Lake Monona from street level on the south side of the Capitol Square. The proposed construction was put to a public referendum in 1992 and it passed. Construction began two years later. In 1997, nearly sixty years after Wright's original inception, Monona Terrace Community and Convention Center opened its doors.

The facility hosts over 600 conventions, meetings and weddings each year that result in an average of $36 million in economic activity for the region. Monona Terrace also runs free community programs that serve approximately 40,000 people each year. Monona Terrace also offers a daily guided tour, a gift shop, a rooftop cafe (warm weather months only), and serves as the home for some of the community's events including the national radio variety show Michael Feldman's Whad'Ya Know?, Ironman Wisconsin, and U.S. Bank Eve.
Image by Nomadseifer on Wikimedia under Creative Commons License.
Sight description based on wikipedia