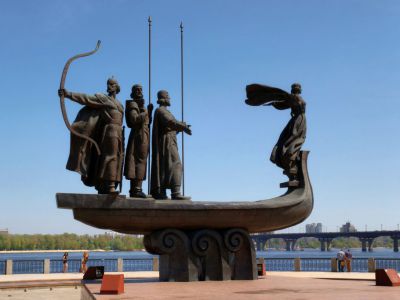 In keeping with its name, the Ladya (boat) monument features a boat with the figures of three brothers - Kyi, Schek and Khoryv - and their sister Lybid, who are believed to be the founders of the city of Kiev. According to a legend, each of the four siblings had their own settlements, which eventually merged into one, named after the oldest of the brothers, Kyi.

Located on the banks of the river Dnieper, near the Dnipro metro station, the monument was inaugurated on the 1500th anniversary of the Ukrainian capital, in 1981.

The sculptural composition, officially known as the “Hovering Swan”, was created by Vasiliy Boroday and Nicolay Feshenko, and was made entirely of hammered cooper. The composition appears as if emerging from a granite pool, which creates an illusion of a boat sliding over a calm sea.

Aside from its historical importance, the monument also has a romantic meaning. Ukrainian brides come here on their wedding day and throw bouquets over their heads in the direction of the boat, while standing with their backs to it. The idea is to have the bouquet land inside of the boat, as a sign of a family's future happiness. Also, near the Ladya grows a “marriage” tree upon which the brides tie ribbons for a happy life and beautiful and healthy children.

In 2010, the statue was partially damaged, but restored quickly, just in time for the Independence Day celebration.
Image by Alexxx Malev on Flickr under Creative Commons License.