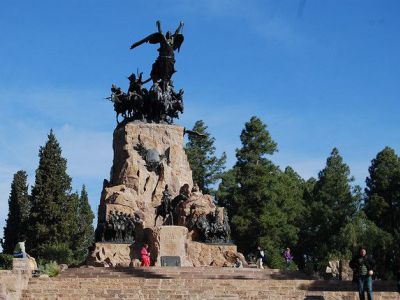 Monument to the Army of the Andes, Mendoza

Monument to the Army of the Andes sits at the top of the Cerro de la Gloria in General San Martín Park. It was created by the Uruguayan sculptor Juan Manuel Ferrari, who had developed two models and picked the most important aspects from both of them. Ferrari visited the province to choose the place for the monument. When he saw Cerro del Pilar, he exclaimed: “This is my mound!”. In 1913, Cerro del Pilar was renamed to Cerro de la Gloria and construction works began. All the parts of the sculptural composition are made of bronze and have deep symbolical meaning. The main theme of the monument is the exaltation of the liberator. In the center of the composition stands the equestrian statue of General San Martín, accompanied by two groups of Grenadiers on his sides. Three friezes of the monument depict the most remarkable moments of the army's formation. Above all these, rises the allegorical figure of Liberty, wrapped in the country's flag, raising the broken chain, symbolizing independence and freedom. At the base are placed the shields of Argentina, Chile and Peru. The monument was inaugurated in February, 1914, on the 97th anniversary of the Battle of Chacabuco.
Image by Fred Lam on Flickr under Creative Commons License.