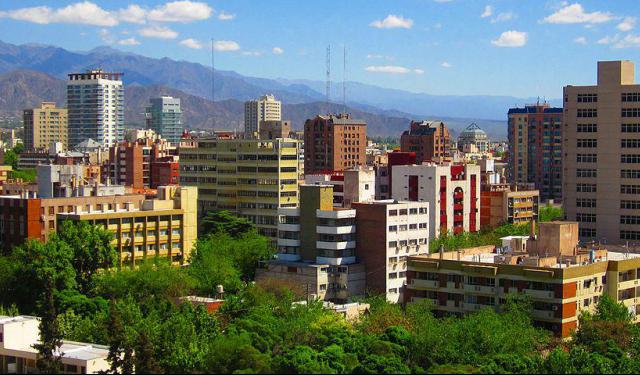 Set at the heart of Argentina's wine-making region of Cuyo, Mendoza city was almost totally destroyed by the devastating earthquake of 1861. The ensued restoration efforts put in by the local authorities have resulted in a plethora of new magnificent landmarks, most of which are must-see attractions for every visitor. On this walk you will see what today's Mendoza is particularly famous for and proud of.
Image Courtesy of Wikimedia and Itsmemarttin.
How it works: Download the app "GPSmyCity: Walks in 1K+ Cities" from iTunes App Store or Google Play to your mobile phone or tablet. The app turns your mobile device into a personal tour guide and its built-in GPS navigation functions guide you from one tour stop to next. The app works offline, so no data plan is needed when traveling abroad.

Plaza Independencia is the main square in the city of Mendoza, it represents 55,000 square meters of green space, creating a perfect place for rest and recreation. The square features many rare and beautiful trees and plants, as well as an incredible fountain with a stunning monument, called “Frieze of Independence”. It depicts several scenes- the first one is an indigenous woman, mounted on a horse and carrying a crucifix in her hand, a symbol of evangelization. The next offers a dramatic view of the oppressed man, who turns his back with his hands tied up; the following scene shows the same man set free. There are also murals that symbolize family, immigrants labor and culture, leading us along the way to independence. This composition gives homage to the immigrant labor and efforts that raised this province, and finally addresses culture as a great liberating force, implying, that there is no independence without culture. The Plaza Independencia also houses the small Teatro Municipal Julio Quintanilla and the Municipal Museum of Modern Art.
Image Courtesy of Flickr and Justin Ornellas.
2

The Colegio Nacional Agustín Álvarez was founded in 1865 on the base of the famous “National College of Buenos Aires”. The current building was designed by famous architect Juan Molina Civic and executed by Mario Fances Gaillard in 1910. The building attracts attention with its restrained façade ornamentation and refined doorway formed by three large arches. This structure has been declared a National Historic Landmark for its outstanding architectural style and significant historic value.
Image Courtesy of Wikimedia and Sefer.
3

The Teatro Independencia ("Independence Theatre") is the premier performing arts venue in Mendoza. The theater resulted from a provincial project for the creation of a hub for tourism along Independence Square. The initiative, enacted by the reformist Governor Carlos Washington Lencinas in 1922, led to the opening of the Plaza Hotel, in 1924, and subsequently to a contract for the construction of the first opera house in Mendoza Province. The contract was awarded to Faustino and Mauricio da Rosa, who at the time managed the renowned Teatro Colón of Buenos Aires by concession. Supervised by the nation's Ministry of Public Works, the project was commissioned to architect Alfredo Israel, and its plans were approved in October 1923. The theater was, as were many public works of this type in Argentina at the time, designed in a French Academy style. Its façade included a Neoclassical fronts featuring four Corinthian columns on a green marble base, a rococo frieze, the provincial escutcheon in bas-relief, and a balustrade above.

The design for the interiors was based on those prevailing in Italian opera houses, and the formal vestibule is overlooked by grand marble steps leading to the concert hall. The auditorium itself includes four tiers of balconies, and its seating capacity is 730. The theater serves as the home of the Provincial Philharmonic Orchestra. Following a pre-inaugural festival organized by the Ladies' Brigade of the right-wing Argentine Patriotic League, the Independenicia was inaugurated on November 18, 1925, with the premiere of La Emigrada (The Emigrée), an opera by Argentine librettist Vicente Martínez Cuitiño; the work was performed by the Compañía Argentina de Dramas y Comedias, and featured Camila Quiroga (one of the leading opera performers in Argentina, at the time).

Cinema installations were added to the theatre in 1944, and these were inaugurated with a showing of Casablanca. The building suffered from a massive fire in 1963, and reopened in 1965 with a performance by the Colón Theatre Ballet Company. Further renovations begun in 2000 included the construction of a 5-story annex, and on September 21, 2003, the theater was re-inaugurated with a performance by Mendoza-born soprano Fabiana Bravo.

Image Courtesy of Wikimedia and Sefer.
Sight description based on Wikipedia.
4

Plaza Chile symbolizes the partnership and solidarity between Argentina and Chile. In the center of the square, we find a monument dedicated to the memory of two heroes revered by both countries. These heroes are Bernardo O'Higgins and General San Martin, they stand shoulder to shoulder in the common fight for the independence and prosperity of their motherlands.

The square also features rare trees, including eucalyptus and a spectacular aguaribay, the oldest in the city.

Avenida Las Heras is the street where you can buy uniquely Argentinian goods, including souvenirs, leather items, trinkets, as well as local chocolates and pastries. The Las Heras avenue concentrates the city's tourist business and is always crowded with visitors.
Image Courtesy of Flickr and Bepi1.
6

Mercado Central is the perfect place to explore Mendozan life style from the inside. Here, locals buy the best food and wines in the city. The Central Market has been in the same location for more than 120 years and is the place to discover and watch many interesting characters, as well as buy everything you might need.
Image Courtesy of Flickr and Rob Allen.
7

The San Francisco Basilica is the first church built after the devastating earthquake of 1861. It was planned as a replacement for the old church destroyed by the earthquake, now known as the San Francisco Ruins. The basilica was raised in Renaissance style on 2,300 square meters. Iglesia de San Francisco is venerated throughout Mendoza due to the fact that it is home to the sacred image of “Nuestra Señora del Carmen de Cuyo”. The southern nave of the church houses the tomb of General San Martín's daughter, Mercedes Tomasa.
Image Courtesy of Wikimedia and Sefer.
8

Edificio Mercantil Andina is located opposite the northwest corner of Plaza San Martin. It is designed by the renown Chilean architect Daniel Ramos Correas in Neo-plateresque style. The Andean Trade Building was inaugurated in 1925. At the moment it is listed among the provincial heritage buildings.
Image Courtesy of Wikimedia and Carlos Simonovich.
9

Banco Hipotecario is one of the most beautiful buildings in Mendoza. It was built in 1924 by the Chilean architect Ramos Correas. The building was designed in neoclassical style, creating an unusual structure for the corner-building. It is “pushed” away from the street, giving space for the atrium entrance opposite the Plaza San Martin. The entrance is crowned with the nation's crest-shields and a small round clock. The building's wings are welcoming visitors with gracious iron balconies and beautiful ornamentation. Today, Banco Hipotecario houses the Ministry of Culture and Tourism.
Image Courtesy of Wikimedia and Luciano Villa Echenique.
10

The Banco de Mendoza was established on August 29, 1888 by governor Tiburcio Benegas. The bank's headquarters were located in the grandiose building on the corner of Avenida 9 de julio and Gutiérrez. Banco de Mendoza had 82 branches, but in April 1999 it went bankrupt and ceased to exist. Nowadays, the ex-bank building houses the Espacio Contemporáneo de Arte (Contemporary Art Space) – the modern art gallery. The EAC exhibits works of Argentinian and South American artists.
Image Courtesy of Wikimedia and Sefer.
11

Pasaje San Martin is listed as a Cultural Heritage of the City landmark. Currently, the building is used as a commercial center. On the outside, Pasaje San Martin is decorated with floral French windows and small refined balconies. Inside, the building features several stained glass domes and round windows. This structure is among the most beautiful and valuable buildings in Mendoza.
Image Courtesy of Flickr and Rodo Kustermann.
12

Mercado Artesanal is located in Edificio de Subsecretaría de Turismo (Undersecretary of Tourism Building). This small store offers the best provincial handicrafts in the city. Mercado Artesanal is very popular among tourists, especially for its vertical and horizontal loom weavings, woven baskets from Lagunas del Rosario, as well as various of indigenous goods, like braided items, and articles from untanned horse leather. Here you can find traditional Huarpe and Araucanian style souvenirs. This is a “must see” place for those looking for local crafts.
Image Courtesy of Flickr and uteart.
13

Plaza España is one of the most popular squares with tourists. The square greets its guests with a typical Spanish patio and a magnificent monument depicting two women: Spain, experienced and powerful; and Argentina, young and energetic. The monument consists of seven scenes: the discovery of America, the foundation of the City of Mendoza, the missionary work of the religious orders, and scenes from "Don Quixote" and "Martin Fierro" with allusive paragraphs. The square also features a beautiful fountain right in front of the monument, completing the ensemble.
Image Courtesy of Wikimedia and Beatrice Louise Murch from United States of America.
14

Established in 1967, Museum of the Cuyo's Past gives a deep insight into the lifestyle and roots of the Cuyo region inhabitants. The museum mainly concentrates on the 19th century period. It occupies 16 rooms and 4 courtyards. The exhibition consists of furniture, pictorial works, documents, household objects, creating the atmosphere of the time and taking the visitors back to the 19th century. Each of the rooms has its own theme and focuses on a specific part of life, we have an archeological room, religious room, weapons’ room, room of oil in Mendoza, room dedicated to the Unitarian and Federal ideas, Independence room, the civil governor room, and, the most popular one, room dedicated to Liberator General don José de San Martín. Along with the exhibited items and showpieces, the museum houses a library of more that 5,000 volumes, as well as newspapers and documents recording facts from Mendoza's history.
Image Courtesy of Wikimedia and Sefer.
15

Plaza Italia is one of the “checkerboard” squares planned by the Argentinian government for the New City of Mendoza after the earthquake of 1861. In 1919, the “Loba Capitolina” (Capitoline Wolf), a bronze sculpture of a she-wolf suckling twin infants (Romulus and Remus), inspired by the legend of the founding of Rome, was setup in the center of the square. In 1951, the square was remodeled with the addition of a central fountain, a stunning work by Luis Perlotti, representing Italo-Argentinian fellowship. At the base of the composition were placed Italian and Argentinian shields, on the sides – two stone figures, 3.3 meters each, representing Argentina with a harvest and Italy with a book. In the center of the composition, stands a grandiose figure of Rome. In 1996, a new sculpture was installed in the central fountain of the square. The figure, designed by Giorgio Igne, represents a woman leading a horse with one of her hands and keeping the other on a wheel with Italian regional insignias. This sculpture symbolizes happy and prosperous Argentinian future, based on the lessons of its history and past.
Image Courtesy of Flickr and pandrcutts.