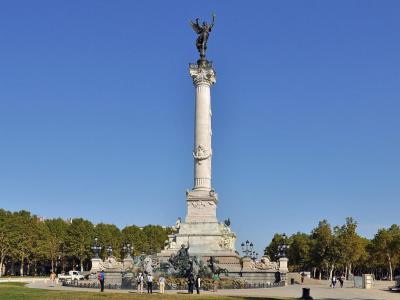 Monument to the Girondins, Bordeaux (must see)

The Monument to the Girondins (Monument aux Girondins) is one of Bordeaux’s most distinctive landmarks. A statue atop a 43-metre high column, it is completed at the base by an ornate fountain, cast in bronze. It can be found on the Esplanade de Quinconces, a wide promenade next to the River Garonne.

The monument is a tribute to the Girondins, a political group that has roots in the Gironde department, of which Bordeaux is the capital. An affiliation of radical intellectuals, they were intrinsic to the wave of anti-royal feeling which swept France in the 18th century. Eventually, the movement swept beyond their control, with the outbreak of the revolution.

The monarchy was overthrown, and divisions grew between Paris and provincial France. The Girondins’ rival political group, the Montagnards, assumed power and called for the execution of the group’s ringleaders. They famously sang “rather death than slavery”, when facing the guillotine, and became martyrs for the cause of free and peaceful France. The statue at the top of the column represents Freedom breaking out of his shackles.

Why You Should Visit:
Huge, impressive, massive water fountain. At the base of the monument's central column, there is a massive, elaborate and heroic landscape of statuary – horses, cherubs, sea creatures and human figures – each one sculpted in a vigorous and strikingly realistic motion. The whole thing is just bursting with energy and the water playing and spraying in and around it adds to this feeling of a captured moment in a tumult of motion. It is a similar effect to the bombastic marble Trevi Fountain in Rome but possibly even better executed.

Tip:
Looks awesome when it turns dark and lights turn on. Be sure and climb up behind the fountains to get a better view of the statues.
Image Courtesy of Wikimedia and Marc Ryckaert (MJJR).